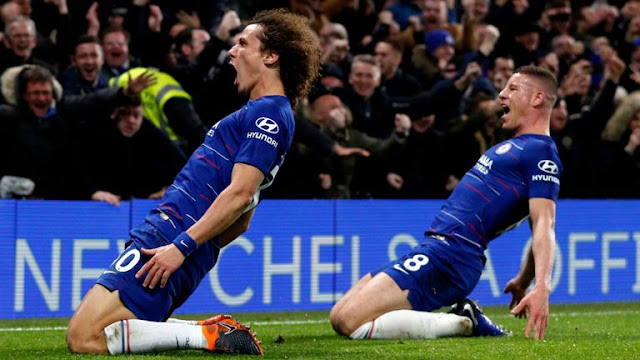 Premier League : Chelsea dominate and hand Manchester City their first defeat at Stanford Bridge 2 – 0, thanks to goals from N’golo Kante and David Luiz
City started out dominating the first few minutes of the game but lost it all after Chelsea’s first goal and also couldn’t get back in the game till Chelsea double the score with David Luiz header.
Manchester City 3 – 1 Everton FC Football Highlights
Goals (2-0) And Cards

Man Of The Match :  N’golo Kante

Chelsea are unbeaten in 12 Premier League games at Stamford Bridge (W7 D5), their longest run without a league defeat on home soil since a 21-game streak ending in August 2015.

Manchester City suffered their first Premier League defeat in 22 games, since a 2-3 defeat to Manchester United in April.

Maurizio Sarri enjoyed his first-ever victory over Pep Guardiola, ending a run of three defeats against the Spaniard in all competitions (W1 L3).

Kanté’s opening goal came via Chelsea’s first shot of the match in the 45th minute (44:02), the longest they have had to wait for a shot in a league game at Stamford Bridge since 2006-07.


With four goal involvements in the Premier League this season in 16 games (2 goals, 2 assists), Kanté has already equalled his combined goal and assist tallies from his previous two top-flight seasons with Chelsea (2 goals, 2 assists in 69 games).