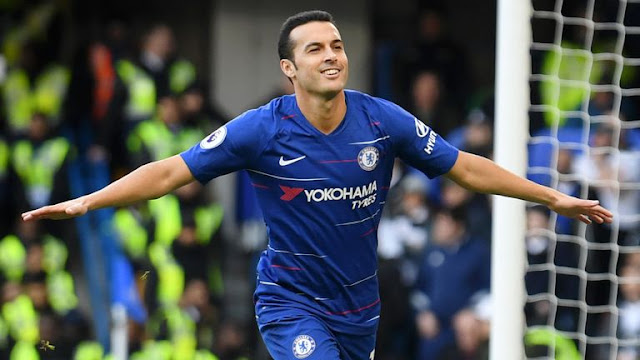 Chelsea FC maintain their lap over Tottenham into third position with a 2 – 0 win over Fulham.
Chelsea made use of their only one opportunity in each half, Pedro putting the Blues ahead with a the Fourth Minute stunners
Latest Arsenal 4 – 2 Tottenham Hotspur (Premier League )
Goals (2 – 0) And Cards

Man Of The Match :  Pedro

🌐 Chelsea haven’t lost any of their last 11 home games in the Premier League (W6 D5) – their longest unbeaten run at Stamford Bridge in the competition since August 2015 (a run of 21 games).

🌐 Chelsea are unbeaten in their previous 17 Premier League games against Fulham (W10 D7), winning each of the last four in a row.

🌐 This was the 14th time that a former Chelsea manager has returned to Stamford Bridge in a Premier League game and failed to win (D5 L9), with this being Fulham manager Claudio Ranieri’s third such attempt (D1 L2).

🌐 Fulham have failed to keep a clean sheet in each of their last 18 games in the Premier League, and are the only side yet to keep one in the competition this season.

🌐 Pedro’s opener for Chelsea was their 1000th home goal in the Premier League, becoming just the third club to reach this landmark in the competition after Manchester United and Arsenal.

🌐 Chelsea midfielder Ruben Loftus-Cheek has scored five goals in his last six appearances in all competitions for Chelsea, including in back-to-back Premier League games for the first time.