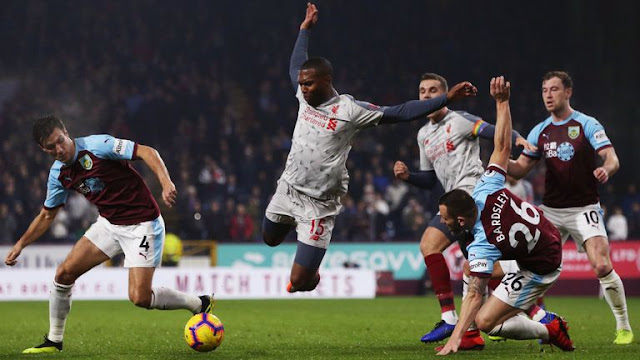 Premier League : Liverpool came from   goal down to defeat struggling Burnley to reduce points from the top to two.
Livepool got stunned by a Burnley early second half goal but was able to break the compact defense after the hour mark.
Highlights : Manchester United 2 – 2 Arsenal (Premier League)
Goals (1-3) And Cards

Man Of The Match :  James Milner

Burnley have won just nine points from their opening 15 games this season. Just three of the previous 18 teams to have won nine points or fewer from their first 15 games of a Premier League season have avoided relegation: Sunderland in 2013-14, Wigan in 2007-08 and Coventry in 1995-96.

Alisson has remained unbeaten in his opening 15 league matches as a Liverpool player; equalling the club record in the Premier League set by Javier Mascherano in November 2007.

This was the first Premier League game that none of the trio of Mohamed Salah, Roberto Firmino or Sadio Mane have been in Liverpool’s starting XI since May 2017 versus West Ham United.

Roberto Firmino scored with his first touch of the ball, two minutes and 55 seconds after coming on as a substitute for Liverpool in this match.

This was the 50th game that Liverpool’s James Milner has scored in overall during his Premier League career and he’s not ended on the losing side in any of those matches (W39 D11 L0), which is a Premier League record.

This was the 10th competitive game that Jack Cork has scored in for Burnley overall and the first time he’s lost when doing so (W8 D1 L1).