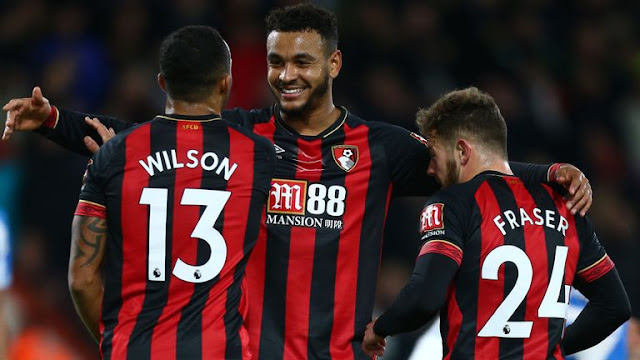 Premier League : AFC Bournemouth took all all three points from Visitors Huddersfield  Town, which takes them into 6th position on the premier League table.
Highlights : Burnley 1 – 3 Liverpool
Goals (2-1) And Cards

Man Of The Match :  Asmir Begovic

Bournemouth are unbeaten in seven home matches against Huddersfield Town in all competitions (W4 D3) since losing 0-1 in League One in August 2007.

Eddie Howe’s side have ended a run of four consecutive Premier League defeats, winning their first game in the competition since a 3-0 victory against Fulham in October.

Since the start of last season, only Brighton (17) and Watford (16) have lost more away Premier League games than Huddersfield (15).

Terence Kongolo’s goal for Huddersfield was their fourth headed goal in the Premier League this season (4/10) – only Burnley (46%) and Newcastle United (55%) have scored a higher percentage of headed goals than Huddersfield (40%) in the competition this season.