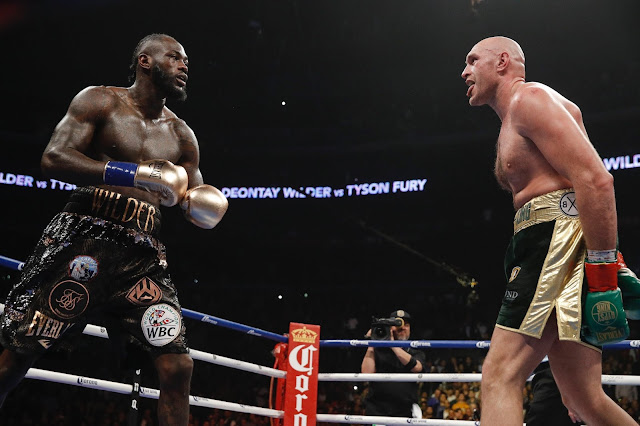 The WBC Heavyweight Champion Deontay Wilder was thoroughly exposed by the lineal Heavyweight Champion Tyson Fury, but according to the Judges made equal the fight by scoring two knockdowns in the 9th and 12th round to secure thh draw on Saturday night at The Staples Center.

Fury just made Wilder miss too much of his very proud knockout wild punches and had looked to run away on the Scorecards, then out of nowhere in the ninth a right hand that sentsFury to the canvas but the Brit came back into the fight. 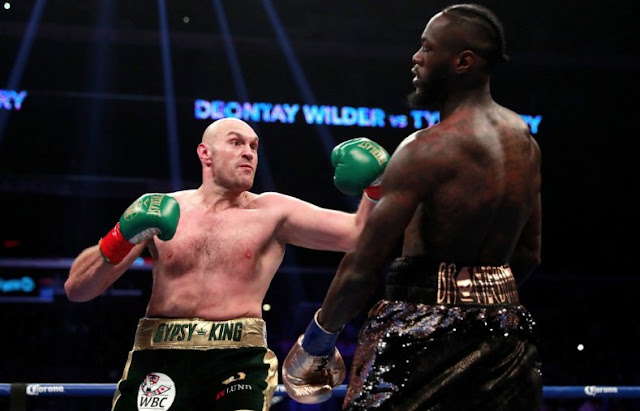 R3: Cagey round before the last minute where Fury lands a terrific right hand on Wilder before another right gets round the guard of the ‘Bronze Bomber’! Fury round for us (28-29)

R4 : Fury, every right hand Wilder threw went over Fury’s head, able to see it coming from a mile away and slip it. Good round for Wilder though, started to show some more urgency behind the jab.(38 – 38)

R6: Halfway stage of the fight and another Fury round for us as he lands successfully where as Wilder struggles to land anything that round!(56-58)

RD 8: Fury really working the jab this round, setting up a few combos. Wilder still looking to land that one big shot but has yet to connect. 10-9 Fury, 76-76 even.

[…] you cant just ignore is that of IBF, IBO, WBA and WBO world heavyweight champion Anthony Joshua.Wilder will put his WBC strap ones again against Fury, after they both battled to a controversial sp… and while they prepare for their rematch. Anthony Joshua , who recently offered himself to assist […]

Foreman Tips Wilder Vs Fury Rematch To Be G.O.A.T – Dopeclics

[…] Of famer and former Heavyweight champion George Foreman will determine the Greatest Of All Time.Wilder and Fury battled to a controversial split draw in their first fight, which saw Fury outbox Fury with huge margins but equalized by two huge knock […]

[…] then, Fury and Wilder both battled to controversial draw back in December 2018, which saw an overweight Fury outbox Wilder through twelve rounds but was dropped twice in the 9th […]

[…] then undefeated WBC Heavyweight Champion Deontay Wilder battled Tyson Fury to a controversial draw in December 2018. An event that saw fury outbox Wilder throughout the twelve rounds of the fight […]