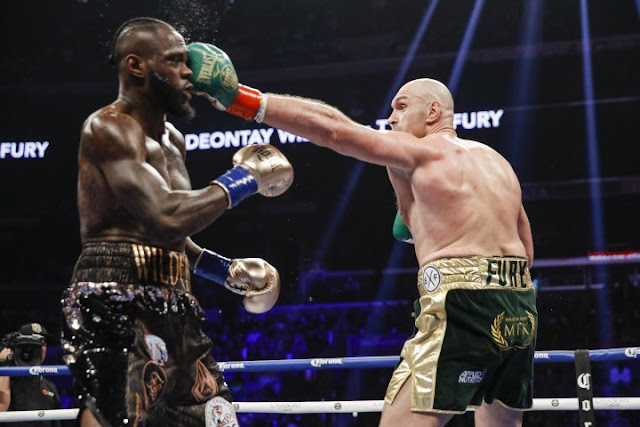 Deontay Wilder defended his title against Tyson Fury on Saturday night, with the clash ending with a controversial majority Draw, due to two knockdowns scored by the Champion.

Fury showed great heart getting up after a knockdown many though was a knock out in the twelveth round to finish a fight he dominated from the start to finish.

Deontay Wilder was fortunate to leave with his belt, a thinking on the minds ofomany boxing fans and according to Wilder’s trainer co-manager Jay Dean, there will be chance for unfinished business in the Uk

“If it’s something that people would like to see again we would absolutely love to do it. Both guys put on a tremendous fight,” Deas said.

“If it was up to me — and only me — I would like to do the Fury fight first because I think there is unfinished business.

“If the money makes sense in the UK I would love to do it there. Deontay has never had a problem with travelling. That’s not the issue at all.”

Deontay Wilder believes the win should have been his, despite the fact that the whole boxing community believes the reverse.

“I think with the two knockdowns, I definitely won the fight,” Wilder said in his in-ring interview with Showtime Boxing.

“We poured our hearts out. We’re both warriors, we both went head to head, but with those two drops, I feel like I won the fight. I didn’t think he had control of the fight. I think I let out just as much as he did.”