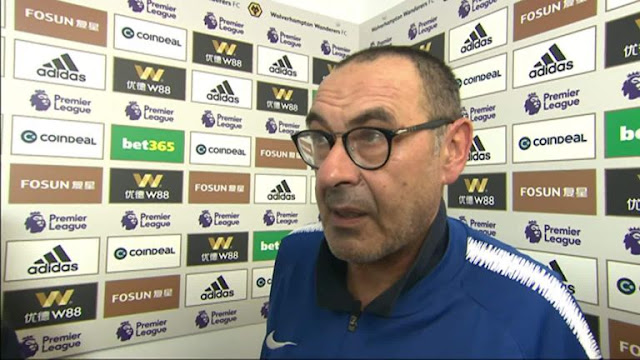 Maurizio Sarri saw his team lose a game after an early goal advantage and a first half win, granting Wolverhampton Wanderers a great comrback win but was able to pick the differences in his team that led to their loss  and the positives ahead of their Clash  it Manchester City at the Ethiad.

The Italian pointed fingers  to the high confidence levels of his team and how it led to their downfall and also pin pointed the attitude change after conceding the equalizer.

“Of course, after this match we lost confidence but maybe it is better because sometimes my players show me they have too much confidence,” he said.

“It is more important to talk about our attitude after the first goal. We were not the same team as before, we were another team.

“Maybe it was important for the result but not for me. I have to understand why the team was suddenly another team because we were in control of the match.

Sarri claimed the equalizer was an “accident” but claimed his team didn’t react to the goal at all, which has left him worried, due to the fact that he needs to understand, why.

Pele – Lionel Messi Can Never Be The Greatest Of All Time

“I thought we played very well for 55 minutes,” Sarri added. “After the first goal, that was an accident because we were in control of the match, we were suddenly another team, without our distances and without our football.”

“I am very worried but not for the result, for the fact that we did not react to the first goal of the opponent. We didn’t react at all so I am really very worried for this, not the result.”