Adonis Stevenson – Oleksander Govzdyk Will Be Knocked Out 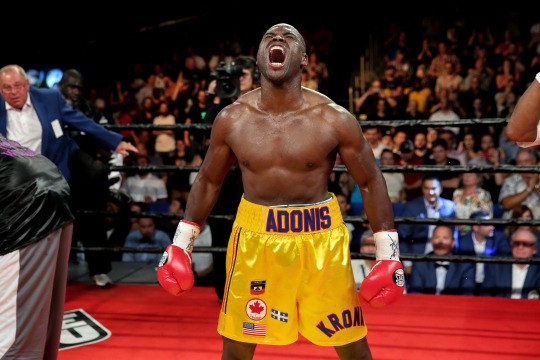 The WBC 175-pound Champion Adonis Stevenson will be defending his title for the 10th time tonight and this time he promises to end it via knockout, just for the Fans.

Stevenson (29-1-1, 24 KOs) will be defending his title against the 10 years younger, Ukrainian 2012 Olympic bronze medalist Oleksander Govzdyk (15-0, 12 KOs) at Centre Videotron in Quebec City, broadcasted live on Showtime at 7: 45 ET.

Adonis Stevenson has only Praised the younger fighter for his accomplishments and has given in that there are some weaknesses he can exploit.

“I know Gvozdyk is a good boxer. He was a bronze medalist at the Olympics and he has a European style. His movement is good, and he has good technique,” said Stevenson, who weighed 174 ¼ compared to Gvozdyk’s 174 ½ on Friday.

“But there are definitely weaknesses that I plan to exploit. I don’t care at all that the bookmakers think I’m going to lose this fight. I’ve been the champion since 2013, and so many people have doubted me in all of my defenses. If I let that affect me, I would have lost my belt a long time ago.”

Tyson Fury : I Can’t Be A Great, If I Don’t Defeat Deontay Wilder

Stevenson has promised to make the fight short, in order to avoid the outcome of his defense with Badou Jack, which ended in a draw and also to give the Fans what they crave for “A Knockout”.

“I am very hungry. I want to win this fight by knockout. My hometown fans don’t come here to watch me fight for 12 rounds,” said Stevenson. “They want to see a body on the canvas. They’re always looking for the knockout and so am I. I know that all I have to do is touch him once and it’s checkmate.”