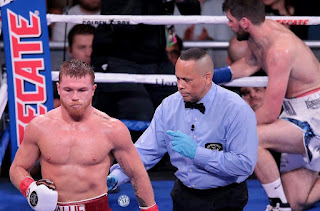 Danny Jacobs Banks On His Advantages Over Canelo Alvarez

Canelo Alvarez (51-1-2, 35 KOs) was aggressive from the opening bell and before the fight was stopped had scored four KnockDown’s, one each in the first and second round and twice in the third round.

The referee stopped the fight at exactly 2:38 of the third round, immediately following that fourth knockdown to win the WBA world super middleweight title from England’s Fielding (27-2, 15 KOs).

The six inches taller, Fielding took a knee four-times in the fight, after taking heavy hard left hooks to the body from the middleweight King.

Fielding had landed a flurry of shots on Alvarez early in the third, but Alvarez had already noticed his opponent was fading and got encouraged… Got in there and did what he does best.