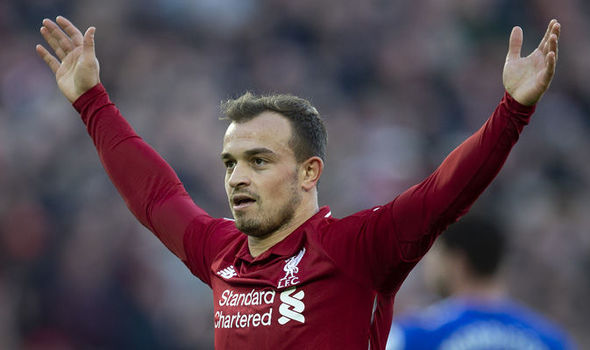 Xherdan Shaqiri has blasted fans, claiming he deserves more respect after making a huge start to his Liverpool career.

Relagated with Stoke City last season, the Swiss was brought back to the Premier  League by Jurgen Klopp, with a fee dwarfed by combined £160m Klopp paid to sign Fabinho, Naby Keita and Alisson.

A Champions League winner with Bayern Munich and owning a World Cup Hat Trick to his name, Shaqiri wants the England Fans to acknowledge his quality and what he has achieved and brings to the game at Liverpool.

“It’s an unbelievable feeling for me to be at this level after what happened at Stoke last season,” he told the Mirror.

“Being relegated with Stoke was a very bad experience for the club and for me and I hope they can come back quickly.
“But despite what happened there, I am a Champions League winner. I think that deserves respect.

“People should remember where I played before, the qualities I have, and what I have achieved in the game. I played for one of the biggest teams in the world in Munich and again I am playing for one of the big clubs, so I don’t feel any pressure from the Liverpool shirt.

“When I go back to Munich, the fans show me that I am loved. I want it to be the same here. Why not a second time?”

Shaqiri, who has scored one’s and created three assists for Liverpool this season, will with his team turn heads to their UEFA Champions League Clash with