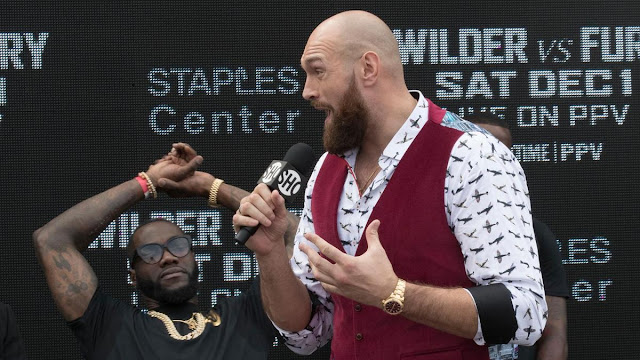 Tyson Fury will be challenging for the WBC Title, held by Knockout artist Deontay Wilder and according to Ricky Hatton will give the Unbeaten Champion big problems, due to his Supreme confidence.

Hatton, who will be with Ben Davison as well as legendary trainer Freddie Roach in Fury’s corner this weekend said Fury has other attributes that will possibly disturb Wilder but the self believe will be his biggest weapon.

“If anyone can do it after just two fights back it is Tyson,” said Hatton, who will be with Ben Davison.

“Tyson has many attributes – his skill, his height, his awkwardness but Wilder’s biggest problem will be Tyson’s belief in himself.

“He went to Germany against Klitschko and wasn’t bothered, he is going to LA and is not bothered, only had two fights back and not bothered.

“He believes he is one of the greatest of all time. That is what Deontay is up against – someone with that belief.”

Tyson Fury and Deontay Wilder will exchange gloves on the 1st of December, a fight many doubted will materialize due to the recent happening in the Heavyweight division and now that it’s happening Fury promises to make the most out of PPV in America.

“After I win the WBC belt I will be staying here. You won’t see me fighting in England again. You heard it here first,” added the 30-year-old.

“Once I beat Wilder I will be the next big pay-per-view star in America, the land of opportunity.”