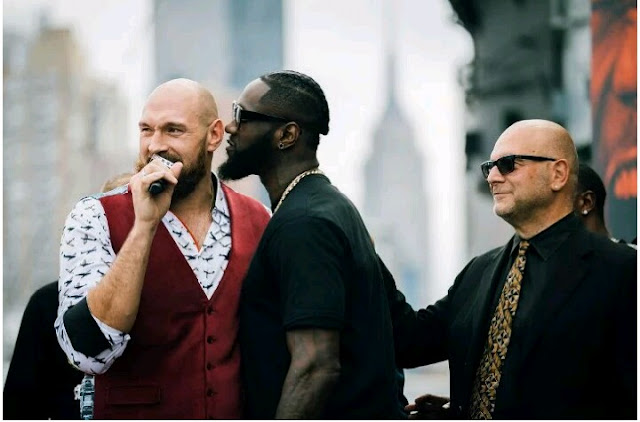 Tyson Fury has promised to hand Deontay Wilder much more humiliation, than he did to Wladimir Klitschko back in 2015.

Tyson Fury returned earlier this year, claiming two knockout victories against mild oppositions and his fight against WBC Heavyweight Champion Deontay Wilder has been seen by many to come too soon, making him a slight underdog.

Fury claimed that, he has a plan and that the hard hitting Wilder, will have issues with his movements, when both meet for the WBC Heavyweight Title and also for the Lineal Heavyweight status.

“Everyone says I won’t do it against a big puncher. But I did it against Klitschko and I will against Wilder. I’m going to have fun. Wilder is going to have the most awkward night of his life, believe me. FURY told Sunday Telegraph

“Wilder’s style is very unusual, but he’s very conventional in some ways. A lot of people make out he’s very wild, but he’s calm and only throws big bombs when he knows his opponent is in trouble. But I’ve got something up my sleeve. Like Max Schmeling saw something with Joe Louis [in 1936] and he didn’t tell anybody the plan.

“I see something with Wilder. And I’m not going to tell anybody until I reveal it on the night. There’s a chink in that armour.

“My movement and speed is enough to disarm anybody. My length is very underestimated. Wilder has never fought anybody bigger than him and he’s never had to punch up before. He’s never had to chase someone down who’s moving.

“With all power punchers, they’ve got to set their feet. He can’t land power punches on the move. He’s got to stand still and that’s something I don’t do.”

Tyson Fury acknowledged that this will be his biggest fight due to the risk involved, and predicts that it will be cagey early in the fight, as he is a bigger opposition than to Sefer Seferi.

“Don’t get me wrong – he’s a tough fight for anybody. People think it’ll be this big war, but it will be a chess match, cagey early on.

“It is the biggest challenge of my career. If I make one mistake, it’s over. It could be over, because he’s probably the biggest puncher in history. Definitely one of them.
“I’m a heavyweight historian and I don’t believe anyone has had that record [39 out of 40 knockouts].

“Being the hungry challenger, not a champion, gets more out of me. When I’m expected to beat Sefer Seferi, Francesco Pianeta or Joe Bloggs, I only do enough to win.

“But when you’ve got someone like Wilder, who is a real challenge, it’s different. I know I have to be on my mettle for every second, because he’s so dangerous.

“I believe I can do everything I need to do. But you can never tell if it’s going to be good enough on the night, until you’re in there. As soon as I’m in there for 10 seconds I’ll know what will happen, I’ll know if I’m going to win or lose.”

Tyson Fury will challenge for Deontay Wilder WBC Heavyweight Title on the 1st of December, broadcasted live on SHOWTIME PPV.