Tyson Fury – A Million Percent Sure Am Winning Deontay Wilder 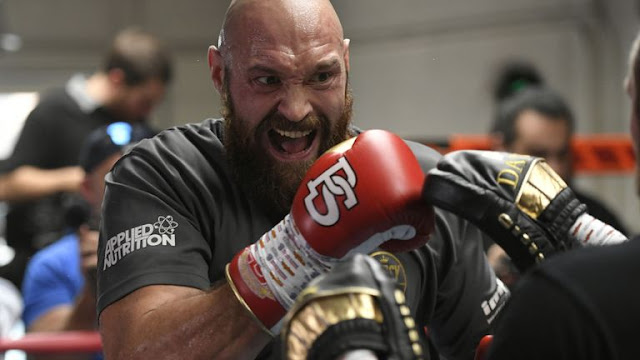 Tyson Fury seems pretty sure of the outcome of Saturday title fight against WBC Champion Deontay Wilder, when they both meet at the Staples Center.

Fury sees himself, as the one coming out victorious and the new WBC Champion by Sunday morning because his hard work in the Gym will speak for him in the squared Circle.

“I’m going to win this fight – one million per cent. There is not a doubt in my mind. No matter what he brings on Saturday night I will over come him and win and take the WBC title back to the UK.

Tyson Fury Won’t Be A Great, He Can’t Beat Up Bum Deontay Wilder

Fury also believes that with 27 fights, he has enough experience to take on what ever Wilder brings to the ring on Saturday. Fury also explained, he is under no form of pressure ahead of the fightf

“I’m going to go in there and do my best on Saturday night. I’m very relaxed I don’t get very tense before a fight – it’s just another fight for me. It’s another boxing match.

“I don’t really have a weight goal (for this fight) but I’ve worked very hard and I’m as heavy as I have been in most of my fights. I was 257 pounds on the nail this morning.”