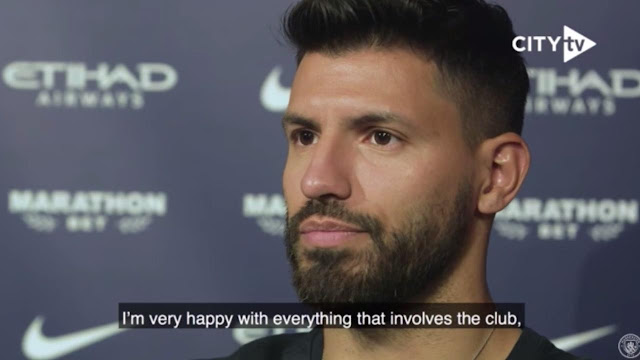 Sergio Aguero has been one of the key players in Pep Guardiola’s Manchester City,  who are actually aiming to defend the Premier League title. He Admits the season will be complicated but sees only Liverpool and Chelsea chalenging for the trophy.

“I think the Premier League is going to be more complicated this season than last,” said the Argentine.

“I think Liverpool and Chelsea are our main threats, without forgetting Arsenal, as they have been playing really well recently.
“It’s very difficult to win the Premier League again, but I think we have a good team.”

Manchester City finished the season with 100 points and are looking set to replicate the points gap of last season, however, Aguero believes that with the ongoing win rate, teams will find it very difficult to stop them

“We are on top of the table and we have the desire to achieve that [back-to-back titles]. At the end of the day, it’s going to depend on us. If we keep playing well and getting three points after three points, what the rest of the teams do is not going to matter.
“But I think it’s going to be tight until the end of the season. I don’t think many teams have managed to win back-to-back. It’s always good to set goals and try to achieve them.
“We are focused on our goal, so I think if we all pull together, we can do something historic.”