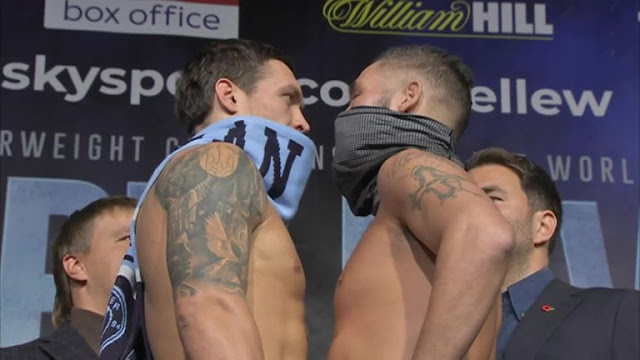 Oleksandr Usyk and Tony Bellew both mmde Weight ahead of their fight for the Undisputed Cruiserweight crown at the Manchester Arena on Saturday and both seemed to comfortable going into the fight.

During the face off both fighters appeared with a covering, Usyk mimicking Bellew’s new found attitude with a Manchester City scarf and predicting the fight from thh face off Bellew said, “No fear. A lunatic”

“No fear. A lunatic. The exact same thing that he’s looking at. It’s like two maniacs in the mirror.

“We’re going to create madness, and you’re going to get one of the greatest fights you’ve ever seen of all time, believe you me. As long as he doesn’t come here to run, play games, and steal decisions.

“He’s a formidable and fantastic champion. Pound for pound one of the kings of the world. I’ve been an underdog so many times, you might as well start calling me the ‘overdog’, because tomorrow night I’m going to shock the odds once again, and surprise the whole world of boxing.

“The only person who beats me, is me. Tomorrow night I will be crowned the king of the world.”

Usyk on the hand said more of himself than Bellew, his weight cut issues and Just as Bellew has a prediction of “War”, when they Both meet tomorrow.

“I feel fantastic, fat boy is in shape,” he said.
“I made weight, told everyone I would, and I’m ready for war.

“I told them right there, be ready for war tomorrow, because that’s what this is. There can be no peace until there is war. Tomorrow night, I’m going to war, believe you me.

“He’s in at the deep end. I know exactly where I’m at. I’ve experienced everything in this game. Tomorrow night, it’s going to show. I cannot wait for war.”

Oleksandr Usyk and Tony Bellew will meet in an anticipated Showdown, which will determine the Undisputed Cruiserweight Champion of the World at the Manchester Arena.

Tony Bellew Promises Blood and Brutality Ahead Of Usyk’s Clash