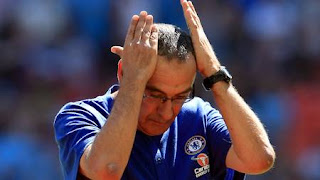 Maurizio Sarri and his Chelsea fell to their first defeat at Wembley against Tottenham at Wembley, a 3 – 1 loss with all round superior display from The Spurs.

The Italian was furious with the performance from his side, calling it a “disaster”, after his side fell 2 – 0 down in the first 16 minutes  to ended an 18 – match unbeaten run.

“We were surprised because today they played with the 4-3-1-2. But after five minutes the situation was very clear.

“In the first 25 or 30 minutes, we had a lot of problems getting the ball out of our half. Against Tottenham that is very dangerous to lose the ball in your half, because with their short counter attacks they are maybe one of the strongest teams in Europe.”

Andres Iniesta Blast Jose Mourinho For National Team Damage
Sarri also called off any reasoning that a turned down penalty from Eden Hazard would have changed the game at the end of 90 minutes.

“I don’t think [it would have changed things],” he said. “For 90 minutes there was a difference, so I don’t think so.

“I have to think and study the other 90 minutes, not only one action. I don’t know if it was a penalty or not. I saw it from 50-60 metres. From the bench, my position, I thought it was a penalty, but I have to say that Tottenham won very well.”