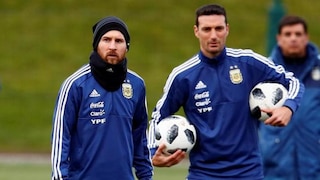 Argentina’s interim coach Lionel Scaloni has expressed his only regret in his short time in charge of the Argentina National Team.

Scaloni has only been in charge of six National Team games and will be ending his tenure this year against Mexico. He replied when asked of his only regrets.

“Maybe not coaching Messi [has been] the only regret,” said Scaloni in a news conference on arrival at the team hotel in Mendoza. ” I’m convinced that we did everything else that we had to do.”

Lionel Messi has been absent in thh Argentinian national team since the World Cup in Russia and Scaloni said there was really no reason to change that, as Messi seemed tired of the topic.

“I wouldn’t like to answer about something that I they haven’t offered,” he said. “I don’t want to talk about a supposition.

“Things are as they are, or not. It could happen, or not. For the time being we are here until tomorrow.”