Kamaru Usman : Rafael Dos Anjos Will Be Outmanned And Outgunned 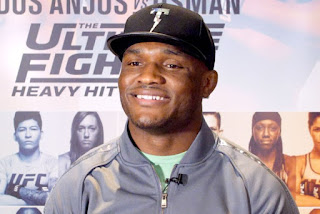 Kamaru Usman will be Crowning a tough  year at the TUF 28 Finale headliner against former lightweight champion Rafael dos Anjos (28-10 MMA, 17-8 UFC). A fight he approaches with some calmness.

Usman had a few disappointments, after Derren Till failed to make weight and Tyron Woodley still refused him, as replacement  after preparing for that big opportunity.

“I’m thinking, ‘OK, I’m training for a world title fight. All right,’” Usman today told MMAjunkie. “It’s a different level of training when you know this is for all the marbles – you’ve got to give it a little extra ‘mmph.’ And then here comes the statement from Tyron saying ‘I’m not going to fight (Usman) if (Till) doesn’t make weight.’ So now, when you do something like that you force the organization’s hands …”

“My spirit was high the whole time,” he said. “I was at ease with the thought that, ‘Hey, if this is the opportunity, if this is the plan that’s supposed to happen for me, then it’s going to take place. If it’s not, then hey, we’ll just wait for our turn.’”

However, Usman Praised his opponent for the Friday fight, for his resume and all round ability but sees himself, as a big favourite going into the fight and hopes to earn his title shot after defeating the former champion.

“Very tough guy – very well-rounded fighter,” Usman said. “It just comes down to when you get into a fight with a guy, someone’s going to win, someone’s going to lose. Period. Someone’s always going to be a better man at the end of that day. This is just one of those cases where he’s just going to be outmanned and outgunned. I’m just a bigger, stronger, faster version of what he’s faced in the past.”