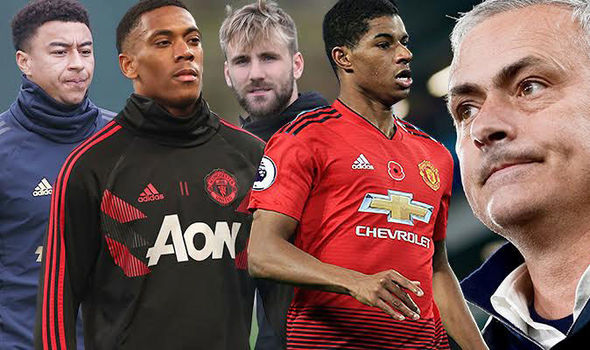 Jose Mourinho has now turned on four of his key players and having already had issues in the start of the season, his new statements will just make more Enemies in his dressing room.

Jose Mourinho has struggled with Manchester United this season and many point hands towards his Man management methods, which awards him dressing room enemies in every Managerial Job. This time he talks Maturity of Luke Shaw, Martial, Lingard and Rashford.

“They are lacking maturity,” he told Univision . “And let me be clear when I say maturity, I mean maturity on a personal level.

“We had more men, we were more mature, we were more prepared for life, we were less protected. They are spoilt kids now, the kids of today have a different life, an easier environment and I’m talking about the people around the players.

“These people give them too much affection and too many excuses. People mature much more slowly now. Luke Shaw, he’s got big potential but doesn’t know how to behave. Big potential, yes, big potential.

“We’re talking about Luke Shaw, Martial, Lingard, Rashford – young, big potential, but at the end of the day it results in the word I cannot say, but you use it a lot here… character, personality, they lack a little.”

Sanchez, Pogba and Martial have all had issues with the Portuguese this season, with the results dropping duedto those dressidr room clashes.

The 56 year old Mourinho, has through tough love improved Luke Shaw and while Rashford and Martial have links to other clubs, especially Martial, who is expecteseto leave in the summer.