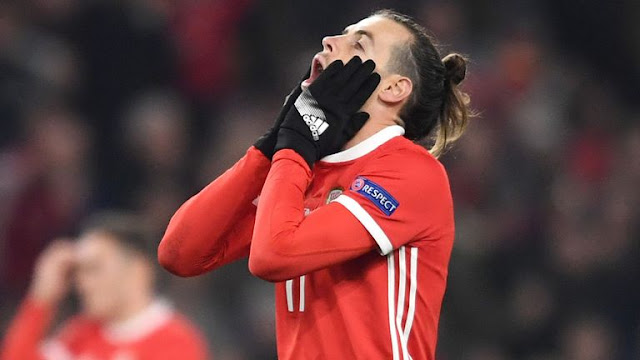 Gareth Bale’s Goal was not enough to save Wale, as they got sung deep with two goals from relentless Denmark, soiling all hopes of  promoting in the UEFA Nations League .
Goals (1 – 2) And Cards

Man Of The Match :  David Brooks

Wales have now lost two of their last three competitive matches at the Cardiff City Stadium (W1); they had only suffered two defeats in their previous 14 such games at the ground prior to this.

Wales have lost back-to-back home games in all competitions for the first time since September 2012, when they lost three in succession.

Wales have conceded as many goals in their last four international games (eight) as they had in their previous 13 combined.

Gareth Bale has been directly involved in seven goals in his five appearances for Wales in 2018 (five goals, two assists).

There were just 84 seconds between Martin Braithwaite putting Denmark 2-0 ahead and Gareth Bale pulling one back for Wales.


Nicolai Jørgensen’s goal was his first for Denmark in over a year since he netted in a World Cup qualifying match against Poland in September 2018, 441 days ago.