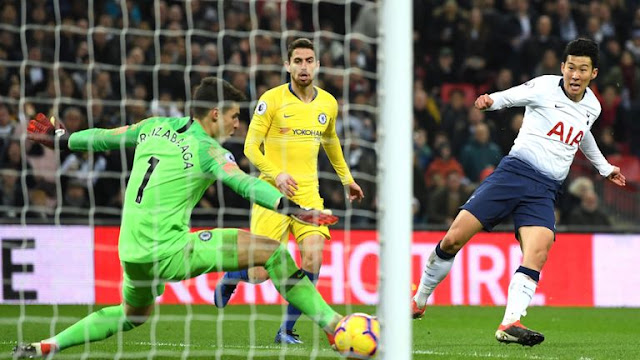 Man Of The Match :  Christian Eriksen

Tottenham have won three of their last four Premier League games against Chelsea (L1), as many as they had in their previous 20 against them in the competition (W3 D9 L8).

Chelsea suffered their first league defeat of the season, last losing on the final day of the 2017-18 campaign (0-3 vs Newcastle).

Tottenham have won consecutive league games against Chelsea for the first time since August 1987.

Since Mauricio Pochettino has been in charge, Tottenham have won more Premier League London derby matches than any other side (22).

Tottenham’s Dele Alli has scored more goals against Chelsea in all competitions than he has against any other side (6).

Son Heung-min’s strike was his 50th goal for Tottenham in all competitions, in what was his 154th appearance for the club.

Chelsea’s Olivier Giroud became only the second player in Premier League history to score 20 goals as a substitute (Jermain Defoe 24).