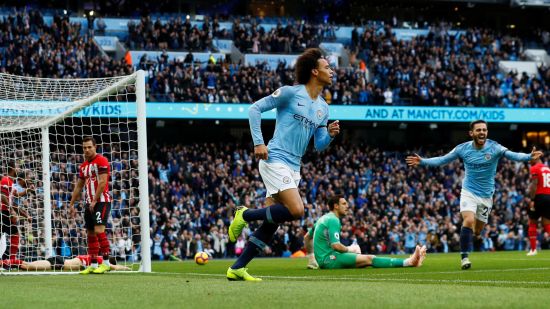 Raheem Sterling helps Manchester City with a brace, as they cruise to an easy 6 – 1 over Southampton at the Ethiad,
Goals (5 – 1) And Cards

Man Of The Match :  Raheem Sterling

Manchester City are unbeaten in their last 43 Premier League games when kicking off at 3pm (W37 D6).

Southampton are winless in nine games at the Etihad Stadium (D1 L8) since winning their very first game there in April 2004.

Manchester City have scored five or more goals in a single Premier League game for the 12th time under Guardiola.

Ings’ penalty for Southampton was their first goal in 505 minutes of Premier League football, and subsequently ended Manchester City’s run of 630 minutes without conceding a goal in the competition.

Sane has assisted 18 Premier League goals since the start of last season, more than any other player in the competition.

Sterling scored his 50th goal in all competitions for the club in what was his 153rd game and 126th start.

Hoedt has now scored two own goals in this season’s Premier League, more than any other player in the division.