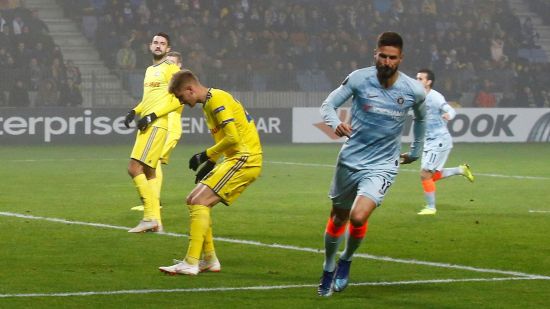 Chelsea FC qualify for UEFA Europa League knock out stages with a 0 – 1 Win over BATE Borisov in Belarus, thanks to Giroud’s 52nd minute finish.

Man Of The Match :  Zakhar Volkov

BATE Borisov have lost on each of the three occasions they have hosted an English side in Europe (also 1-2 vs Everton in Oct 2009 and 2-4 vs Arsenal in Sep 2017).

Chelsea have won four consecutive games in European competition for the first time since April 2012, when they went on to win the Champions League.

Maurizio Sarri has won all 10 of his Europa League group stage games as a manager, with his sides scoring 28 goals while conceding just four in return.

Olivier Giroud scored his first goal for Chelsea since netting against Liverpool in May – he had gone 14 games, 793 minutes and 24 shots without scoring.