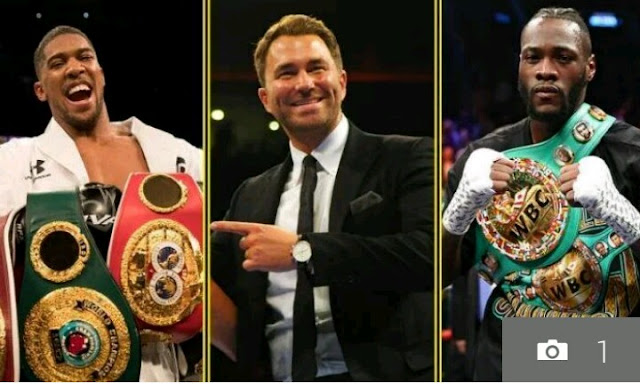 Eddie Hearn knows all what it takes to make a fight and has the understanding that WBC Champion Deontay Wilder will be kicking in on the Tyson Fury rematch clause, if he loses on December 1st. Hence, a reason for an alternative for the Unified Heavyweight Champion Anthony Joshua is under debate.

Hearn wants to rush the negotiations for a Wilder fight  with Anthony Joshua’s at Wembley in April, next year. After failing to reach an agreement in their previous attempt.

Jean Pascal :Beating Dmitry Bivol Makes Me The Best In The Division

Eddie Hearn is giving the Wilder team a benefit of doubt, after they claimed they will resume negotiations with Joshua after the fury fight. He said he is planning to table a two fight deal for the Wilder fight, immediately after his defence against Fury (Sunday morning after the fight)

“If Fury wins and the rematch clause kicks in, we know we’ve got to move on ourselves, but my instruction is ‘Make that fight.’

“They haven’t really wanted to speak to me before it. Now when the fight’s over, if Wilder wins, we’ll be on him on Sunday, saying any chance now? Can we meet now? If they say no again, I don’t know what else we can do.

“If they are true to their word, on December 2, if they beat Tyson Fury, we will immediately start negotiations and we’ll see where we get to. April 13 is easy, and it’s a two-fight deal this time, the offer that we’ve made. One in America, one in the UK, we cannot say fairer than that.

“We’ve got to do our best to try and make it happen, and we’ll be doing that straight after the fight. We’ve been trying to do it for the last two months, but no, wait, wait, wait.

“We’ll wait and then we’ll have a go on December 2, and we’ve probably got three weeks to make the fight. It’s enough time, if everyone is sensible, but who knows whether they really want it deep down.”

However, Eddie Hearn has explained why, He and Anthony Joshua will be absent at the Wilder fight with Fury on December  1st.

“We’ve got our show in Italy next Friday, and AJ goes out on Tuesday to film in America,” said Hearn.

“He’ll also be at the ‘Canelo’ fight with DAZN, and he’ll be doing a lot of media stuff around there. Will he watch? Probably, yeah. I haven’t really spoken to him about the fight that much. He’s just focused on Deontay Wilder.”