Dillian Whyte Vs Dereck Chisora : Finalized For December 22 At O2 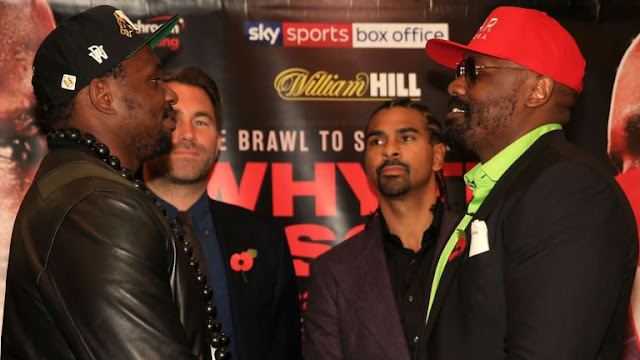 Dillian Whyte and Dereck Chisora will exchange leather again on December 22 at O2 Arena in London.

Dillian Whyte (24-1, 17 KOs) , who defeated Former World Champion Joseph Parker (24-2, 18 KOs) in his last fight, made little off the threats brought by Dereck Chisora and his new manager David Haye at a press conference on Thursday.

Whyte defeated Chisora via a unanimous decision in their first fight, Joked about the lead up and how it didn’t border him, when both got into the ring.

“You can’t intimidate me Dereck, I’m not scared. You threw a table and it didn’t bother me. There’s not an ounce of fear here. I have a bit of respect, I’m an animal lover.”

With Chisora making Whyte laugh with with a treat “There are not enough men here to hold me back, if you get personal,”  and laughed again when Chisora’s new Boss David Haye seem to said he had “Untapped Reserves “

“Chisora will show something that he’s never shown. I don’t want to scare anyone but this guy has untapped reserves.”

Dillian Whyte called Dereck Chisora a donkey and really showed no respect for his Managerial alliance with David Haye.

“Dereck is the real definition of a donkey, he teamed up with David and got a worse deal,” Whyte said. “Why would you go and give David 25 per cent of your money?
“Maybe David will give you emotional support.”