Skip to content
HomeBoxing NewsDeontay Wilder – My Power Makes Me Feel, I Can Kill A Man

Deontay Wilder : My Power Makes Me Feel, I Can Kill A Man 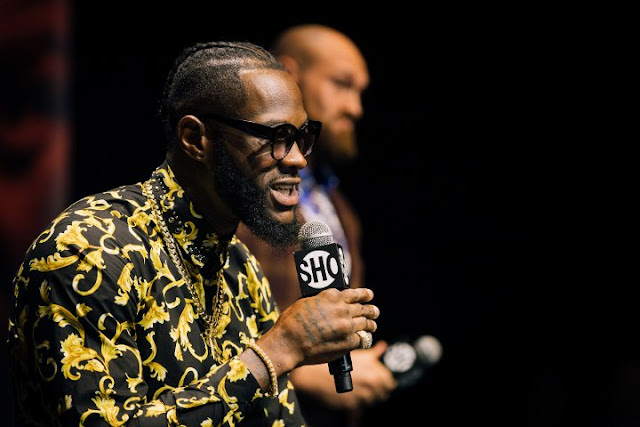 Deontay Wilder without no doubt be expecting to score another knockout with against Tyson Fury in the defense of his WBC Heavyweight Title on December 1st, at Staples Center in Los Angeles. Showtime Pay-Per-View will televise the card.

Deontay Wilder has knocked out every opponent he has faced and the only to last the distance, Bermane Stiverne couldn’t last a round rematch. The much feared Luis Ortiz lasted only ten rounds.

Wilder (40-0, 39 KOs) described the feeling as a scary one, that makes him feel, he could kill a man and he promised to go for the kill  immediately he finds Fury in trouble.

“When my mind transforms it is a scary feeling because it is a source of power that takes over and allows me to feel like I know I can kill a man,” Wilder said to The Sun.
“People have a problem with me saying it because I can do so. People have a problem, because I do possess the power to do it. When I have a feeling come over me, I don’t know the strength of my own power. It’s unexplainable. The week of the fight is when I start to transform, it just takes hold, especially the day of the fight. I’m no longer myself, nothing is funny, everything is serious.

“A fighter is not going to stay in the ring with me if I don’t want them to. I have a killer instinct that is crazy. If you are hurt and wounded, you are going to get out of there. I don’t get paid for overtime, so why sit around? Why wait? I like to get a knockout, the heavyweight division is based on power. I like to give the people what they want to see, a devastating knockout, and I deliver that each and every time.”