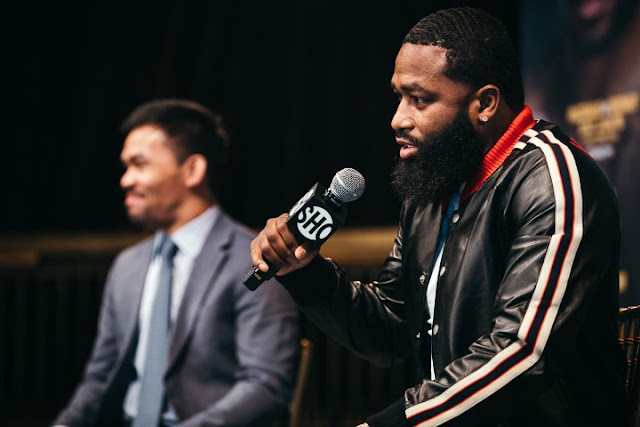 Broner will hope to defeat the 39 year old in his 70th fight the Squared Circle and had nothing but Praises for the “Future Hall Of Famer”, for his unbelievable achievement in the Boxing game, but also promised to give him a good fight, as the opportunity means a lot to him.

“I’m really thankful. There were a lot of people who wanted this fight and God blessed me to get it. I guess I am just the chosen one,” said Broner. “He’s a future hall-of-famer. It’s going to be a helluva fight. All the things he’s done in this game is unbelievable. I have only got a chance y’all could dream of, I don’t even know how I’m feeling right now. It means a lot to me. A win, I turn a legend overnight.”

Manny Pacquiao  who has held world titles from flyweight to light-middleweight will really love a rematch of his loss to retired unbeaten five-division champion Floyd Mayweather and while he explained the failure in its materialization, Broner made clear he should now worry about him… Atleast for now.

“He ain’t fighting Floyd, he’s fighting me. I’m gonna beat your ass, you worry about Floyd, he’s already beat you brother,” said Broner. “F*** the money, I know when I win this fight, there is more money to come. Excuse my language but this ain’t Nickelodeon, this is pay-per-view.”

In Pacquiao’s last outing, he claimed the WBA world welterweight title by stopping Lucas Mattysse in the seventh round of their fight in Kuala Lumpur in July. His first knockout since 2009 and the Filipino improved his record to 60 wins, seven defeats and two draws.

Join Us On Whatsapp

Broner is also a three-division champion, having held world titles at super-featherweight, lightweight, light-welterweight and welterweight. Considered a heir to Floyd Mayweather due to his speed and power that propelled him to 27-0 earlier in his career. He has now surfered 3 loses in his last 10 outings.