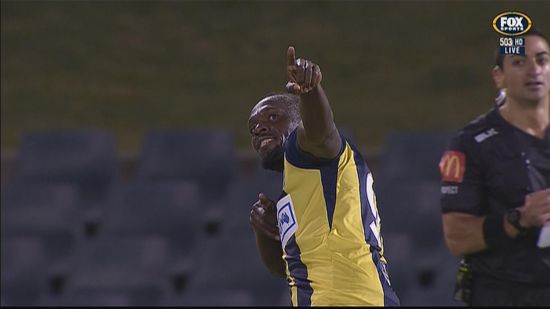 Usain Bolt has finally signed a professional Football contract with Australian side East Coast Mariners, after impressing the club during his trial period.

Before the contract, the 32 Year Old Usain Bolt scored a brace during an exhibition match, which also paved way for a contract offer from a European club, aiming for UEFA Champions League qualifications, an offer he turned down.

Mariners chief executive Shaun Mielekamp reportedly tabled the contract offer with Bolt’s management over the weekend.
Bolt’s Agent blew the news into the media, while speaking to ESPN

“I can confirm Usain has been offered a contract by Central Coast Mariners.”

Central Coast coach Mike Mulvey,  had somehow made known, heading into the weekend, with Speculations of doubt over the Jamaican’s ability in the front three and how he will fit into their line up.

“You have a look at our front line today and you wonder whether he could get into any of those positions, wouldn’t you?” Mulvey said.

“I do appreciate how important this story is for the rest of the world. You’re just talking about speculation, I don’t know anything about what you’re talking about and that’s the honest truth.”

Jose Mourinho would Love To Have Eden Hazard At Manchester United