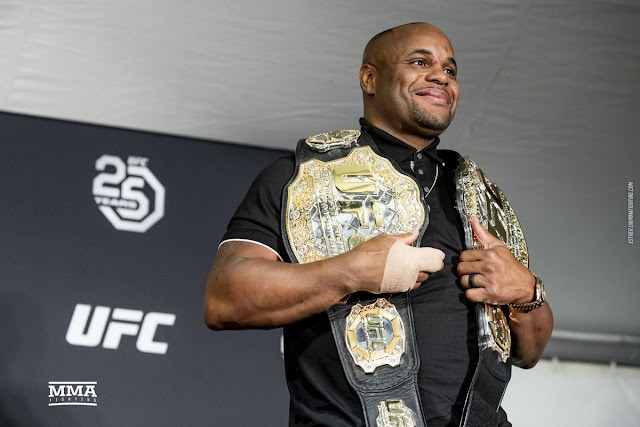 Two division champion Daniel Cormier will be defending his Heavyweight title against Hard hitting Derrick Lewis in the main event of the UFC 230 at the Madison Square Garden on November 3rd.

Daniel Cormier (21-1, 1 NC), who also holds the UFC light Heavyweight title was to wait a while for Brock Lesnar’s return from his WWE venture so the promotion could stage a mega fight between the two  sometime in 2019 but due to the demand for a Fan loving main event, the UFC has decided Cormier will against Lewis.

Daniel Cormier was last in the Octagon in July, when he defeated former U.S. Olympic wrestling captain dethroned Stipe Miocic with a first-round knockout for the UFC Heavyweight title at UFC 226. Before then, he defended his light heavyweight crown with a second-round TKO over Volkan Oezdemir at UFC 220 in January.

Derrick Lewis (21-5, 1 NC) will enter the title fight with an impressive knockout win against Alexander Volkov at UFC 229, where he was outpointed in all the rounds till his knockout blow on Volkov’s Chin in the Fifth round, his 10th UFC Knockout which ties him to Cain Velasquez, with most Heavyweight knockouts in UFC.