Daniel Cormier Threatens To Slap Brock Lesnar In The Face 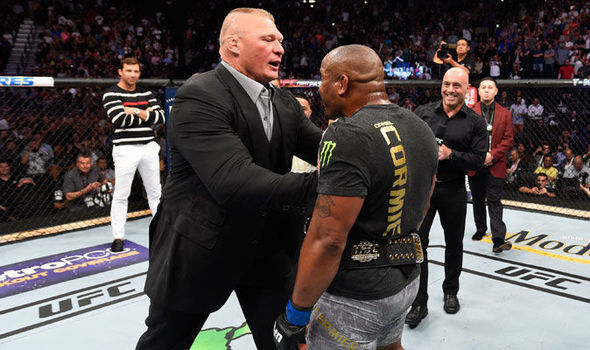 Daniel Cormier will be facing Derrick Lewis at UFC 230 on Saturday, to defend his UFC Heavyweight title but wouldn’t love WWE Star Brock Lesnar coming into the Octagon after the fight.

Cormier promised to slap Lesnar “In The Face”, if he dares to step into the octagon, after hearing rumors, that he will be present at the Event.

Cormier is hoping to secure a huge payday from a mega Fight with Lesnar next year, if he successfully defends his Heavyweight title at the Madison Square Garden on Saturday .

“I heard Brock Lesnar will be at The Garden for UFC 230 . If he tries to step in that cage again, I’m going to slap him in his face. I owe him one from last time.”

Cormier after his win over Stipe Miocic, had some issues with Lesnar presence in the Octagon, which almost resulted in a post Fight brawl.

With Conor McGregor, Khabib Nurmagomedov issues still lingering in our minds, the UFC won’t be loving a similar post fight scene after UFC 230.