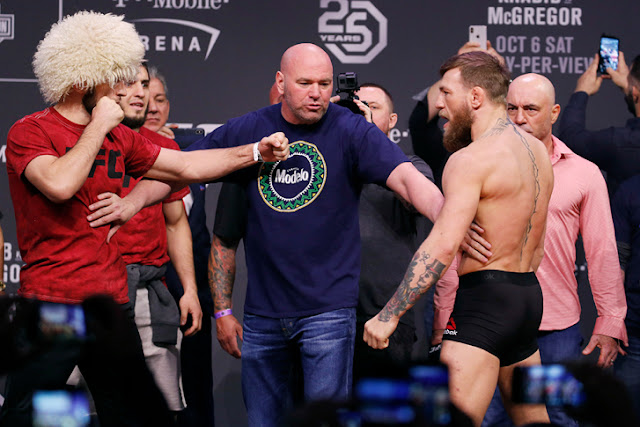 Recap  : Nothing happened for several minutes as neither got willing to throw something heavy. Formiga finally shoots for a takedown and he’s able to put Pettis down, but momentarily. Formiga puts Pettis down again, but this time he’s able to keep him there. Formiga settles in from inside Pettis’ guard and Pettis is trying to either scramble or work his way into a submission. Formiga stays on him the remainder of the round.

Round 2 – The crowd is beginning to boo and Formiga steps in with an uppercut but missed. Formiga shoots for a takedown but he can’t get in deep enough on the hips. He finally tries a kick, and Formiga makes him pay because the Brazilian catches it and turned it into a takedown. Formiga is once again inside Pettis’ guard, but doesn’t have much time on his side.  He postures up with some short elbows and punches, but he can’t land much in the way of damage. He advances to hold guard and is setting up an arm-triangle choke, but Pettis gets his guard back and scrambles free up to his feet just before the rohnd ended.

Recap : Luque throws a pair of kicks to the legs and is the first to land hard, tagging Turner with a right hand over the top. Turner is circling and backing up while trying to use his lengthy to pepper Luque with the jab. Turned lands a stepping knee to Luque’s body but he took it well. Turner connects with a spinning kick to the body then launches into the air with a flying knee that falls just short. Turner Seemed comfortable, but he walks into a massive shot that drops him to the canvas. Luque pounces on his downed foe and lands a flurry that puts Turner out cold. He remained down for a while after the finish.

Recap : Ladd gives out two right hands right hands, Evinger retaliates, landing a cross of her own. Ladd is able to reverse Evinger against the fence then a scramble happens that ends up with Ladd on top. She connects Evinger with some good punches before taking the back. Ladd opens up and is landing lots of heavy shots on her opponent and Evinger is couldn’t find a way out. The referee saw enough and waves it off, Ladd won via TKO.

Recap : Round 1 – Patrick comes out dishing out big kicks, but he immediately eating a clean punch from Holtzman. He launches a spinning back kick to Holtzman’s body  but there was no power on that. He surprises Patrick with a head kick that just barely grazes the Brazilian. They exchange more strikes before Holtzman initiates the first grappling sequence of the fight by clinching against the fence. Patrick tries but misses on another spinning kick then slips off a punch attempt. Holtzman is now on top in half guard and is trying to do some work. He doesn’t have much time.  the round ends.

Round 2 – Patrick starts the round with many shots and which started somewhat sloppy and careless. He walks into a hard counter right hand from Holtzman that forces him to go for a takedown. Holtzman accomodtmates that, though, and is clearly gaining in confidence. Holtzman tries to go for take down and He’s able to connect his hands under Patrick’s legs and scoop him down to the canvas. Patrick tries to scramble for a leg lock. Holtzman lands a pair of nasty elbows to Patrick’s forehead and that causes Patrick to try to scramble back up to his feet. Holtzman lands another hard right hook, but Patrick is taking all the power shots very well. Holtzman clinches up against the fence again, but he doesn’t do much other than land an elbow on the break. Patrick goes for another takedown in the final 20 seconds, but Holtzman doesn’t allow it before time expires.

Round 3 –  Holtzman lands a slick counter right hook, followed by another one moments later that drops Patrick. Holtzman jumps on top and is hunting for the finish! He lands some ground-and-pound before moving to full mount. Holtzman postures up and lands some elbows, but Patrick is able to squirm free and recover his guard. Holtzman doesn’t stop, though, and regains a dominant mount position once more where he lands a flurry of vicious elbows from mount that Patrick out cold. Nasty knockout for Holtzman.

Recap: Kunitskaya came out throwing numerous leg kicks, most ending up in the air.  Lansberg is able to recover the guard and is trying to hold on to Kunitskaya and thwart her advances on the mat.  She eventually does, but Kunitskaya still has her trapped against the fence. She doesn’t stay there for long, though, because Kunitskaya drags the fight back to the ground and the time she’s in side control. Kunitskaya opens up with some punches and elbows but Lansberg is able to protect herself long enough to avoid major damage and last the round.

Round 2 – Lansberg comes out more aggressive kicking to begin the second frame, but Kunitskaya is follows her around, because she wants to grapple. She eventually succeeds in clinching up with Lansberg against the fence and is connecting with some knees to he body as she attempts to score another takedown. Referee separates them giving Lansberg another opportunity to generate offense, and she stings Kunitskaya with a nice right hand.  Kunitskaya is trying for a takedown. She partially gets after turning the corner on the single leg against the fence, but Lansberg is able to stay on her knees and avoid getting put flat on her back to the close out the round.

Round 3 – Lansberg came out determined to make something happen in the final five minutes of the round and she’s pressing forward. Kunitskaya knew she’s well ahead, and kept her distance as to not take any major risks. The majority of the fight has been spent in this position, and Kunitskaya get another takedown from it. Couldnt capitalize and Lansberg quickly finds her way back to a standing position. The referee breaks up the clinch against the cage and now both fighters are throwing some strikes with some head behind them. Kunitskaya catches one of Lansberg’s body kick attempts and gets a final takedown in the center of the octagon to close out the round. Fight ends.. With Kunitskaya winning by score cards.

Recap : Maynard launched the first attack with a big right hand. Lentz counters with some clean shots, though, and Maynard is staggered and hurt. Lentz tries for a takedown on the fence but forces Maynard into a crouched position. He’s tried and successfully took Maynard down. Lentz is landing some good shots, but Maynard is keeping composed and finally frees himself as Lentz misses with a knee. They grapple and Lentz goes for a guillotine choke. He can’t finish it, but manages to get top position on Maynard and is opening up with some punches and elbows. Maynard took a good amount of damage but covered up and tried staying in the fight. He takes a knee of the side of the head from the clinch to the close the round.

Round 2 – Maynard tried to pressure in the opening minute, but walks right into Lentz’s extended finger and the action is halted due to the eye poke. The fight settles into a boxing match and both men are tagging each other with some hard, clean shots. Lentz comes up high with a head kick that drops Maynard and the fight is over! Big finish for “The Carny.”

Recap : LaFlare started out the aggressor in a fight that had tension written all over. With Front kick and superman punch combo from LaFlare, the fight got its pace, with Martin waiting and feeding off the counters.
LaFlare then got swept off the ground breifly with a kick but Martin couldn’t get his right hand connecting but when he did, knocked Laflare down breifly
Laflare drills the body then, tries a take down attempt but fail due to the fence posing an obstacle, opening him up for Martin’s elbow to the head before the first round ended.

R2: both fighters brought the slow start to the second round.. Pawing around waiting for the firstvto strike. then Boom,  Martin times a couinter and drops LaFlare with a right hand. Martin leaps in and goes to work with punches overhead.

Laflare keeps some distance to recover from the shot, Martin working for hooks, and LaFlare turns to his back to recover butterfly guard. LaFlare pitches forward, Martin sets up for D’Arce but wasn’t comfortable. Martin again with a right hand that cracks his foe. Before Round ends.

R3 : Laflare needed more activity to stay hopeful in the Judges eyes but was opening up for much counter hits from Martin and one of  those shots dropped him. Martin follows up an with a few punches … Before the referee called it off.