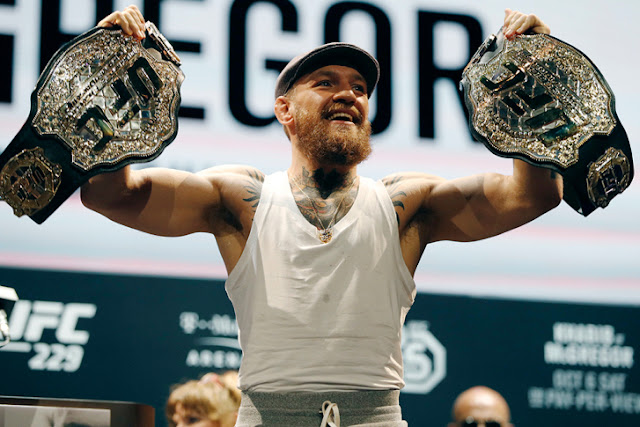 Former two division champion Conor McGregor got stripped of his titles after he stayed long without defending them but in Press Conferences ahead of his fight with Khabib Nurmagomedov in UFC 229, McGregor shows up with two belts, calling himself the champion of the UFC Featherweight and Lightweight divisions.

This has angered his intended opponent and current lightweight Champion Khabib Nurmagomedov, who expressed his disappointment in the UFC giving him that privilege to call himself Champ, when he isn’t even the interim Lightweight Champion Tony Ferguson.

According to Khabib, the Interim champ could call himself a champion and he will be ok with it.

“When you fight like this, high-level fight, you have to believe you’re the champ, nobody can beat you,” Nurmagomedov said during Thursday’s press conference in advance of UFC 229. “It’s OK. I’m OK about this.”

Nurmagomedov also expressed his unhappiness in Dana White asking Conor McGregor for his belts before their face off in last months press conference.

“I’m not OK about this, because Dana already know where is Conor belts,” Nurmagomedov said.

“(Featherweight champ) Max Holloway and Khabib Nurmagomedov, he have to know. But he bring with him belts, believe himself. It’s OK. I’m OK about this. But tell this guy (White), hey, he lose his belts. He lose his mind.”