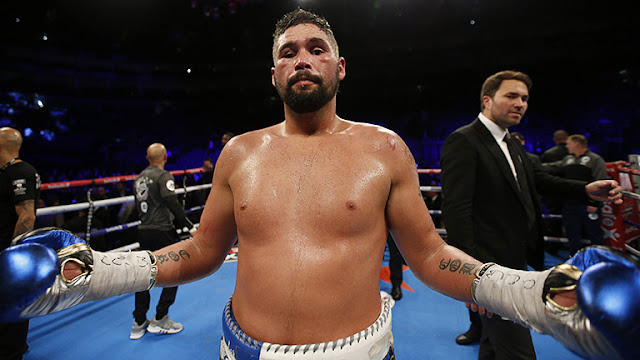 Tony Bellew will be moving down from Heavyweight to face Oleksandr Usyk, for a chance to be Undisputed Cruiserweight champion of the world and will need to shed shed 30lbs to make the recommended  limit.

Bellew made clear in an interview with Sky Sports, physical appearance won’t matter, when he hits the ring for the showdown with the Ukrainian on November 10th at the Manchester Arena.

“When I take my top off on November 9, I think you will see how the 30 pounds have come off,” Bellew told Sky Sports News.

Bellew heaped Praises on his Ukrainian opponent, calling the fight the “toughest” in his professional career but promised, he will shock the World again, as he has been doing the past.

“This is the toughest fight of my life, without a shadow of a doubt,” said Bellew.

“This is the most formidable opponent I have ever faced, and he is the man who everybody is scared of. He is the monster who everyone is running away from, and it’s only a dope like me that can run right at him, and want a fight with him.

“We’ll soon found out, November 10. I’m not going to shock the world for the first time, not even the second time, it’s going to be the third time.”