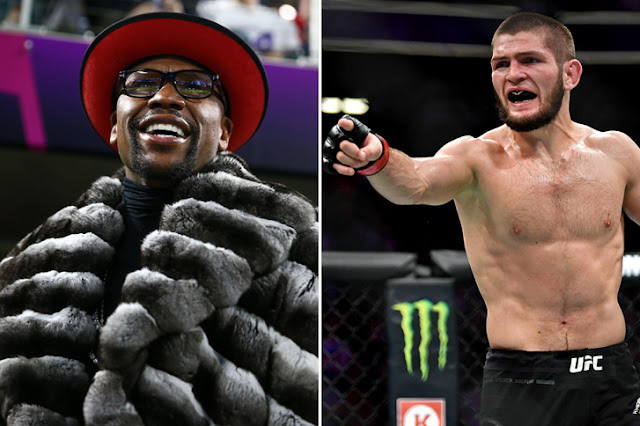 Floyd Mayweather has made known, he and his team are working hard to make the rumored boxing fight with UFC lightweight Champion Khabib Nurmagomedov happen.

Mayweather also made known, the fight will be making him $100m more than the Conor McGregor fight in August 2017.

“… When I face Khabib, I’m getting a nine-figure payday. It’s more than the McGregor fight – probably $100 million more, guaranteed. It could be somewhere between $110 (million) and $200 million (more) guaranteed.”

Khabib Nurmagomedov defeated Conor McGregor in the fourth round by submission, but before then had knocked Conor McGregor down with a striaght right-hand. Speaking after the whole chaos at UFC 229, Khabib said he would love to face Mayweather cause he easily dropped him, when “Money” didn’t.

“I see on (Instagram) and on social media, he put yeah he’ll fight, but he don’t want to fight in Vegas,” Mayweather said. “Of course, we know Vegas is the fighting capital. And after the fight, you have to conduct yourself like a true professional – not just in the ring, but outside the ring also. You have to conduct yourself like a professional, and it was a big melee. I haven’t had a chance to see it, but from what I heard it was a crazy melee.

Floyd Mayweather made a guaranteed $100m facing Conor McGregor (21-4 MMA, 9-2 UFC) , which after Factoring in his bonus from pay-per-view buys, Mayweather is estimated to have made $275 million from the fight, that ended with a 10th round Knockout win.