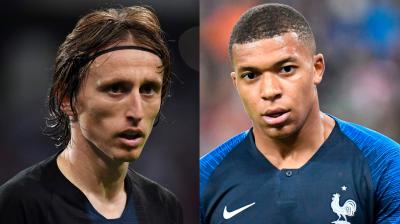 Luka Modric played alongside Cristiano Ronaldo at Real Madrid, which was managed by Zinedine Zidane, few months back, but shortly after their third Champions League Win in a row, Ronaldo and Zidane left the Spanish Giants  creating some shock during the summer.

Ronaldo left Real Madrid after 9 years since his move from Manchester United, to Serie A giants Juventus, while Zidane left his managerial position, opting for one year break and all this came as a surprise to everyone at Real Madrid says Luka Modric

“I didn’t expect it for either of them [to leave],” Modric told France Football. “I didn’t think Zidane was going to leave, same thing for Ronaldo.

“Actually, when the rumour about Cristiano came out, we made bets between us in the dressing room and we were convinced that he would stay in the end. But everyone makes their own choices in life.”

Kylian Mbappe has been phenomenal for both club (Paris Saint Germain ) and Country (France)  helping the later win Football’s prestigious trophy (The FIFA WORLD CUP) during the summer, picking up the FIFA young Player Of The Tournament and getting nominations for both the UEFA, FIFA and Ballon D’or…. All this was Foreseen by Modric, who git tipped the youngster will be great.

“Mbappe is an extraordinary talent, a magnificent promise for the future,” Modric said. “But someone who is already at a great level.

“He’s really very special. I remember my international teammate, Danijel Subasic, said to me one day: ‘There’s a young player at Monaco, you’ll see, he’s incredible, and one day he’ll be one of the best in the world.’

“He was talking to me about Mbappe before he was known about. I’m sure Kylian is going to keep improving.”

Talking about his Ballon D’or nomination, which he stands a favorite to pick the individual gold. Modric refused to let his recent success crowd his mentality, that he is only a Football that has much to improve on the pitch.

“Truth be told, I don’t like that way of talking and saying: ‘Yes, it’s me who deserves the Ballon d’Or’,” he said. “The important thing for me is to be on the pitch as I have been for months now.

“This year, 2018, has undoubtedly been the best of my career and my only objective is to keep going on this path, on this trajectory. You’re not going to get me to say: ‘It’s me who should win it.’ That is up to the experts who vote. It’s in their hands.”