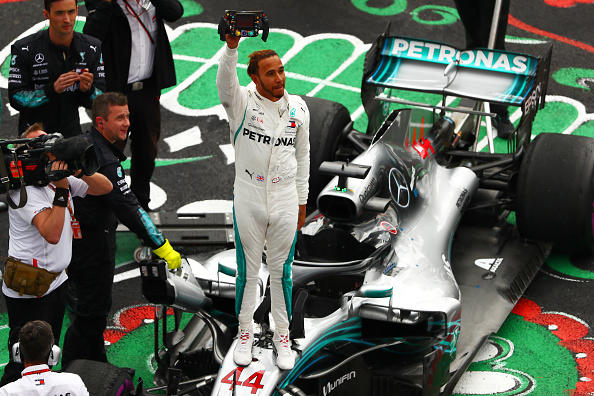 Lewis Hamilton has been crowned, 2018 Formula 1 world champion, after finishing fourth in the Mexican GP.

Hamilton has now won the Championship five times, leveling up with 1950’s legend Juan Manuel Fangio and now behind only Michael Schumacher for the most F1 drivers Championships.

Lewis Hamilton, who is now 33 years old delivered an emotional speech, after his great achievement.

“It’s a very strange feeling right now. It wasn’t won here, it was won through a lot of hard work through many races,” said Hamilton.

“I’ve been with Mercedes since I was 13 so to complete this – Fangio had done it with Mercedes – it’s an incredible feeling and very surreal at the moment.”

Hamilton is exactly the same age (33) and the same number of championships with Michael Schumacher, when he clinched his fifth back in 2002.

“I just feel very humbled by the whole experience. It’s hard to realise it at the moment, it’s something that I dreamed of – but never in a million years did I think I would be standing here today as a five-time world champion. I never knew that was going to happen.

“It’s definitely my best year. And that’s the goal. When I won the championship last year, I was like, ‘how am I going to improve? How can I be fitter? How can I be more focused? How can I be a better all-round driver?’.