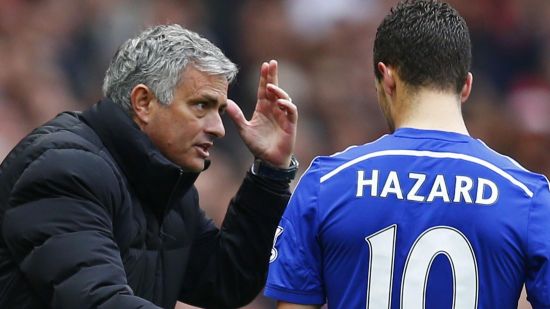 Jose Mourinho has only praises for Chelsea star Eden Hazard, saying he would love him at Manchester United.

Manchester United face Chelsea at Stanford Bridge at lunch time on Saturday and the game might boil down to how effective  Jose Mourinho’s boys will be able to stop Hazard, as in the past.

Eden Hazard was one of the Key players,  the last time Jose Mourinho won his last Premier League Trophy and was also key under Antonio Conte, which gives the Portuguese the impression that his form detects the title race.

“History says that when Eden Hazard is the best player in the Premier League, Chelsea is the champion. It happened with me, it happened with Antonio [Conte].

“Chelsea is top of the league now because he is the kind of player that can make a huge difference.

“Chelsea is led by experience and intelligent people in football. I think they would never sell Eden to Manchester United so it’s not a problem.”

However, the United Boss said, he had a good relationship with the Belgian and added his words will be different, if his relationship wasn’t.

“I think he is just a nice kid. We had a good relationship, we were champions together. he was for the first time best player in the Premier League with me, so I think the feelings are good.

“When the feelings are good you say nice things, when they are not good you don’t say so much nice things.”

Jose Mourinho will be hoping to get a %100 from his boys, as they seek a win at Stanford Bridge , since the departure of Sir Alex Ferguson and also improve thier present League position.