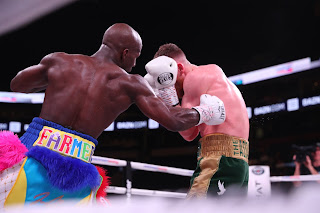 Just as expected before the opening bell, Farmer spent most of the time digging into Tennyson’s body and was never disturbed by the reckless shots Tennyson was throwing.

Farmer dominated the fight till the fifthf when he nailed that perfect shot to his liver to end the fight and retain his IBF Strap.

After the fight he called out Gervonta Davis, as he has been doing recently but acknowledged that Davis is going through promotional issues, which he hopes when solved will give way for the anticipated showdown.