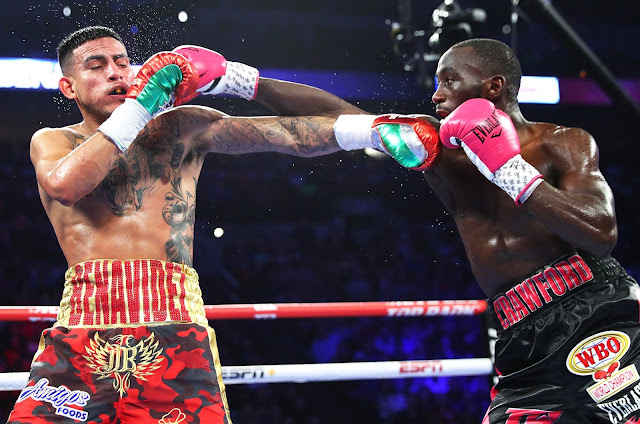 Terence Crawford dominated and gradually worked down Jose Benavidez, before stopping him in the final round of his WBO lightweight championship fight in his hometown.
A right upper cut dropped Benavidez in the 12th and from then could not recover, taking Clean shots without Defense or reply forced the referee tots top the fight.
Benavidez started strong but got tired during the middle rounds, got static and became an easy shot for the remaining round. Crawford was going to win on the score cards if the fight wasn’t stopped, as he was far ahead.
Round By Round

R1 : Both fighters started out Jabbing and Benavidez with the longer reach, had early success but Crawford had to change his stance and used some kind of adjusted jabbing to get inside. It looked more like a grudge fight

R2 : Crawford got the best out of this, with combinations to Benavidez body, which rattled him, but didn’t do much damage. Benavidez was now letting his hand go  but lost his control in the process, opening him up for combinations. 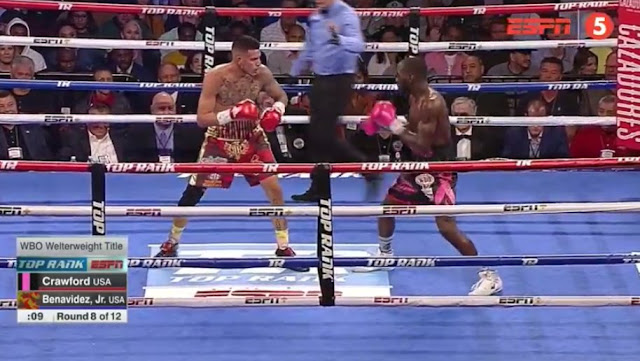 R5: Benavidez starts with a flurry of shots , starting strong but lost his concentration , as Crawford continued to move his feat more creating angles to land shots to the head and body of Benavidez and eventually took the round.
Crawford 10-9. Benavidez long stretches of just standing in the middle of the ring and Crawford going at him. Good Crawford round. 49-46 Crawford.

R7 : 4-3 Crawford . He looks tired but hope it’s a case of him saving himself this and the next round so he can explode later. Tim Bradley looking like an extremely unintelligent commentator 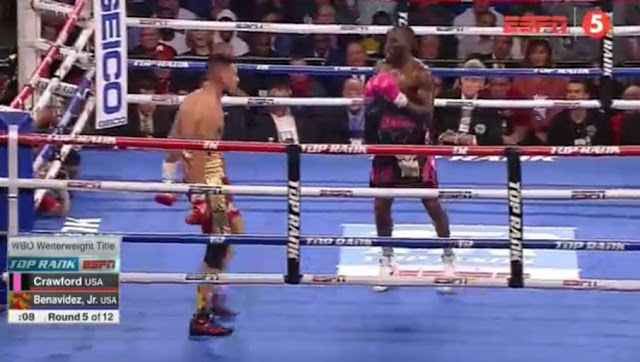 R8 :  upstairs and downstairs. Benavidez slows down and has no movement, just shaking his head after each shit he takes, another Crawford round. Crawford 10-9. Making it look easy with his speed, jab and Benavidez just can’t/won’t put punches together. Crawford 79-73.

R10 : Benavidez seemed to have won a round after luring Crawford into a slugfest via the ropes but got himself tagged too, though with slight  advantage. 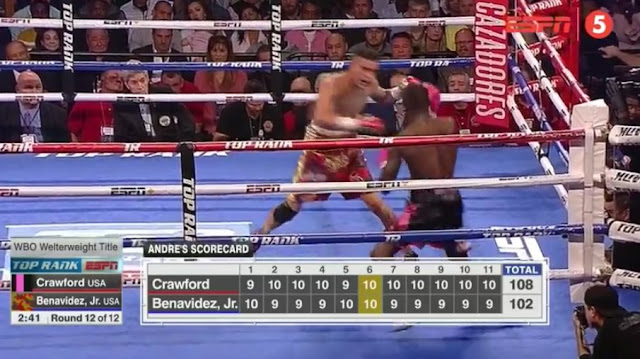 R11. 7-4 Bud.  Bradley took the words right out of my mouth, Bud has taken away the counter after the first phase attack, by exiting with the check right hook. Benavidez needs a KO & will probably go for it in this last round but he doesn’t have enough.

R12: Crawford dominated him in the last round with more 5 punch combos but no KO Power to the fight. Am wrong, Crawford short right uppercut and right hook sent Junior into a tumbling  knockdown‼️ Wow! Knockout. 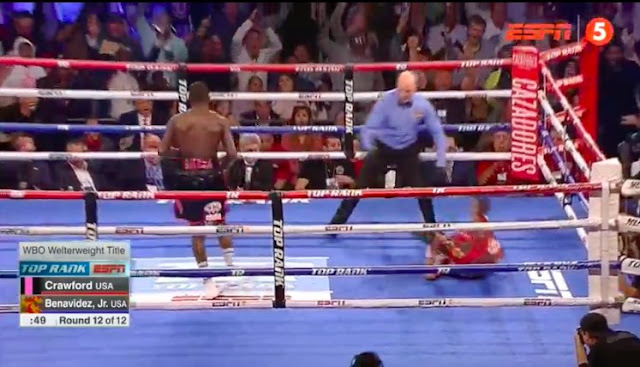