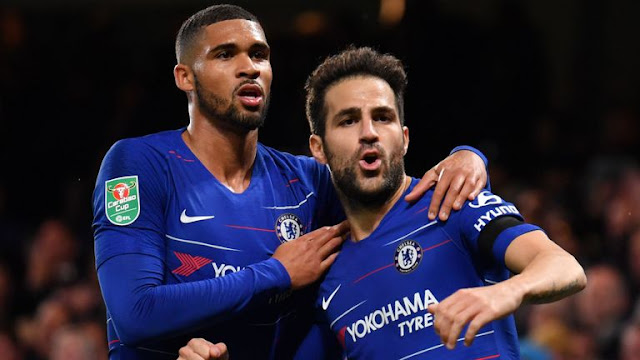 Chelsea proceed to the quarter finals of the EFL (Carabao) Cup, thanks to two own – goals, and a Fabregas winner against Frank Lampard’s Derby County.
The first half ended adter a five goal trailer that saw Derby conceding two own goals and having to level up be for Fabregas winner.
Goals (3-2) And Cards ⚽ Cesc Fabregas has had a hand in seven goals in his last seven League Cup appearances for Chelsea (three goals, four assists).

⚽ Derby County are the first team to score two own-goals against Chelsea since Stoke City did so in the Premier League in January 2013.

⚽ Fikayo Tomori’s own goal is the first that Chelsea have benefited from in the League Cup since Jermaine Grandison put through his own net for Shrewsbury in October 2014, 1464 days ago.

⚽ Jack Marriott has been directly involved in six goals in his last five games for Derby County in all competitions (four goals, two assists).

🌐 Chelsea have progressed from 18 of their last 19 League Cup ties against non-Premier League opponents – the exception was a fourth round exit on penalties against Burnley in 2008-09.