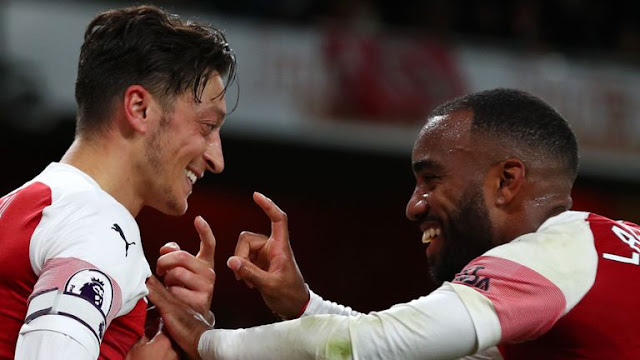 Arsenal recover from an early deficit to defeat Leicester City with a 3 – 1 victory, at the Emirates Stadium, thanks to a brace from Aubameyang.
The will catapults them into the UEFA Qualification mix, high up in the premier League table with 21 points after week 9.
Goals (3 – 1) And Cards

Man Of The Match :   Mesut Ozil

Arsenal have won 10 consecutive matches in all competitions for the first time since October 2007 (a run of 12).

Leicester are winless in their last eight Premier League away games in London (D3 L5), losing the last three in a row.

Pierre-Emerick Aubameyang has been directly involved in 21 goals in his 22 Premier League games for Arsenal (16 goals, 5 assists).

Arsenal have scored more Premier League goals via substitutes this season than any other team (6).

Mesut Ozil has scored three goals in his last four Premier League appearances, as many as he bagged in his previous 22 in the competition.

Hector Bellerin scored his first own goal in the Premier League in what was his 133rd appearance in the competition. The Spanish defender also provided two assists in a PL game for the fourth time in his career.