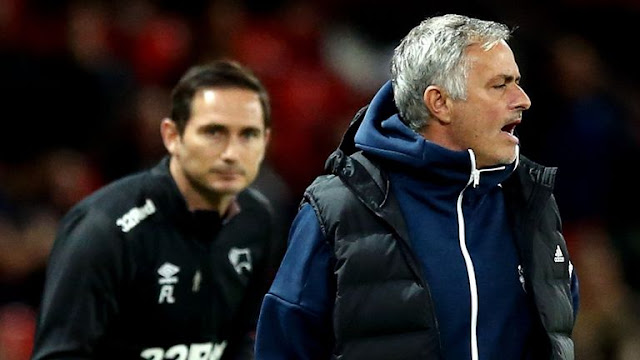 Former Jose Mourinho boy Frank Lampard was in charge of Derby County, when they came up against Manchester United in the Carabao Cup, a game that saw him best his former Boss via penalty shootout.

Manchester United came into that game with a draw with Wolves and after the game lost 3 – 1 to West Ham United in the weekend, which has prompted Lampard to offer support and sympathy for his former Boss.

“Everyone knows my feelings for Jose Mourinho as a manager,” Lampard said.

“It is a tough moment. It is a moment that we will all have, that I will have at times, that every manager has.

“I have heard all his interviews lately. He is a big boy. He will get about doing his job. Of course I feel for him. They are not winning games and they want to be – it is Manchester United.”

Lampard thinks Jose Mourinho is finding it difficult to get the best out of the players on pitch, a problem he believes is paramount for a manager.

“In terms of players, it can be difficult. You need buy-in from your players and you need sometimes the right message to be coming out. I thought that as a player and I think it even more as a manager.

“And you need complete work rate on the pitch. I am not talking about individuals here, I am saying that is what you need.”