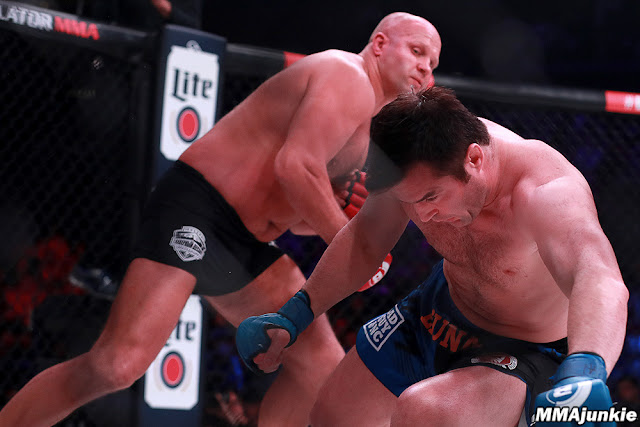 The fight will no doubt be remembered, as a brawl, but Emelianenko just had his way into Sonnen to Stops him in the first round.

Sonnen went after Emelianenko from opening bell, but got dropped with every  punch. kept pushing forward and finally got ahold of Emelianenko with a huge slam from the fence. He established top control and worked some ground-and-pound attacks. Emelianenko stayed composed and swept into top position, but Sonnen kicked him off before taking too much damage.

Emelianenko then landed another big punch that dropped Sonnen to the canvas. He jumped on Sonnen and pounded away with massive strikes and Sonnen was badly hurt. He covered up, and Emelianenko unleashed nasty ground strikes until referee Dan Miragliotta decided he’d seen enough and called off the fight at the the 4:46 mark of Round 1.

[…] Emelianenko has been able to defeat three of his last four opponents and each of his last five fight… before losing to Ryan Bader at Bellator Heavyweight Tournament. He has since bounced back from the loss with a Stoppage win over Pedro Rizzo and also Jaideep Singh of the Rising Federation. […]