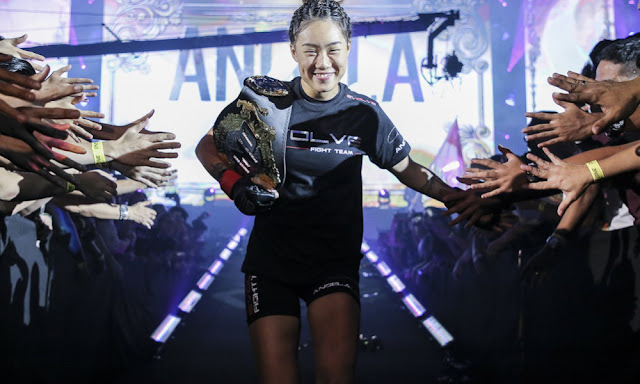 ONE Championship CEO Chatri Sityodtong believes that the One Atomweight Champion Angela Lee might be making a very big mistake, as she plans moving up in weight to face One women’s strawweight champ Jing Nan Xiong (13-1) at ONE Championship 83 on November 9th at the Singapore Indoor Stadium in Singapore and Live on One Championship App.

Lee is unbeaten with a (9 – 0) record but that record, has only been at Atomweight at just 19 and will become the first simultaneous two-division titleholder in women’s MMA history, if she succeeds in her venture into the Strawweight division.

According to Sityodtong, saeseve is taking a very high risk in moving up in weight for the fight with Nan Xiong, who is also a good knockout artist.

“I actually don’t know why Angela is doing this moving up to fight a bigger, stronger, faster champion,” Sityodtong told reporters at a recent ONE Championship 83 media call. “This could be Angela’s first potential loss. This is a high-stakes game. This is a world champion verse world champion fight.”

Sityodtong used reality in analyzing the potential fight, the risk smaller fighters tend to make and their outcomes but believes she could still surprise the world, as she has always done in the past.

“I put Angela as a heavy underdog in this fight because she’s moving up a weight against a very, very dangerous KO striker with a 13-1 record,” Sityodtong said. “She’s finished almost everybody she’s faced. That being said, I also know Angela and she’s always about making history.”

“At 19 years old she became the youngest world champion in the history of any major organization globally,” Sityodtong said. “She’s going to try to make history again as a two-division world champion. She’s not one to shy away from challenges, but let it be very clear: She’s going against a more experienced opponent, a heavier opponent, a stronger opponent who has more KO power. I think Angela’s risking it all on this fight.”