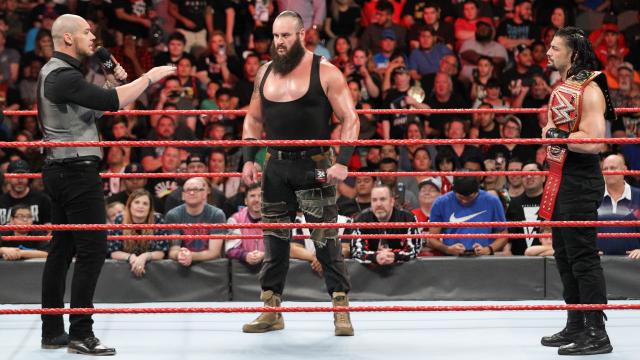 Corbin missed out on the Universal Title despite a massive managerial advantage over The Big Dog that he didn’t hesitate to exploit, not to mention some help — Braun Strowman showed up to attack Reigns after the restart, instigating a brawl that ended up roping indeed olph Ziggler , Drew McIntyre and the rest of The Shield. But even with all conceivable odds stacked in his favor, Corbin fell to a quick-strike Spear when he attempted to make his move. Strowman, Ziggler & McIntyre opted not to make a move on The Shield, seemingly preferring to save their energy for WWE Super Show-Down. So while it’ll take more than shenanigans to topple Roman Reigns as champion, that doesn’t mean a big fight isn’t on the way all the same. 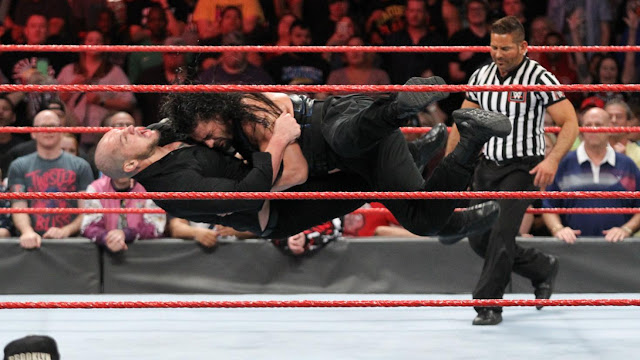 Alicia & Mickie worked hard to focus their efforts on Moon, and they kept the Dallas native away from her partner as long as they could. Alas, they couldn’t keep her away long enough: Nia entered the match and singlehandedly steamrolled her adversaries, holding an interfering Mickie in place for the Eclipse and dispatching Alicia with a Samoan Drop. Welcome back. 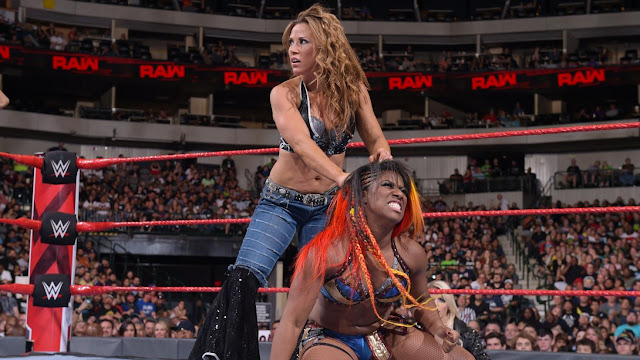 Lio Rush has been Bobby Lashley’s manager for all of five seconds, but he might have just entered himself into the managerial pantheon: Not only did 205 Live’s “Man of the Hour” give Lashley a big-time intro by interrupting Elias, he proved to be instrumental in helping to turn away Kevin Owens , who still has contractual carte blanche and sinister designs on punishing Lashley.

What KO didn’t account for was Rush, who
leapt clean over the former Universal Champion from his perch at commentary and led him on a chase down the ramp. The 23-Year-Old Piece of Gold nailed Elias with an enziguiri when The Living Truth tried to ensnare him, handing Lashley a disqualification loss. But Rush made it up to his client when he allowed Lashley to use him as a projectile: The former ECW Champion scooped Rush up and gorilla-pressed him over the top rope and onto Owens and Elias. 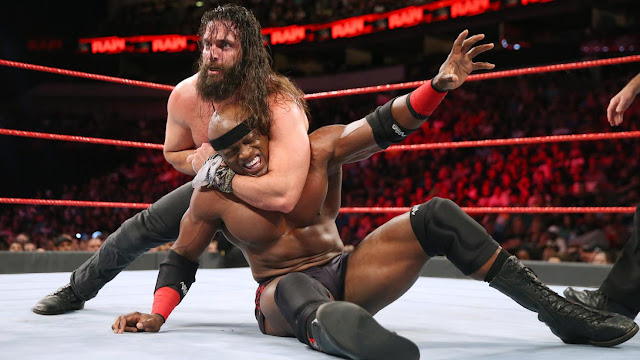 Ronda Rousey is firmly entrenched as Raw Women’s Champion, and the division is wide open for challengers. Despite the lingering damage to her ribs, The Baddest Woman on the Planet decided on Raw she would institute an Open Challenge policy, but what was looking to be a friendly challenge from her training partner
Natalya instead became The Riott Squad’s biggest power play yet.

Ruby Riott , Liv Morgan & Sarah Logan — who’ll face Ronda and The Bella Twins at WWE Super Show-Down — answered The Queen of Harts’ music, dragging the former SmackDown Women’s Champion out to the ramp after an apparent backstage attack. Ruby declared she would be accepting the challenge instead, though Ronda rocked her with a right hand to instigate a three-on-one mugging from The Riott Squad. The Bellas quickly arrived to even the odds. 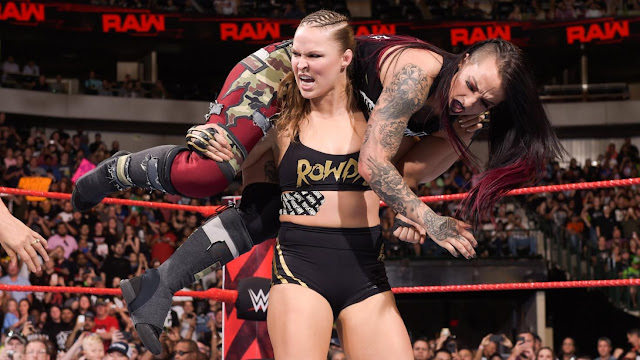 Both fighters had crashed down from fifteen feet in the Hell In A Cell main event on Sunday but Seth Rollins wasn’t ready to lose his title because of that.

Rollins was clutching his back at every turn, and the typically spry Showoff was a step slower than usual, turning the bout into a war of attrition. Rollins was too worn down to complete the superplex-Falcon Arrow twofer, giving The Showoff a crack at a tights-assisted rollup. But Rollins had enough left to hit the Stomp seconds later, and even though it took him longer than usual to crawl over for the cover, two nights’ worth of damage was enough to keep Ziggler down for three. Give Dolph credit for a well-fought battle, but if anybody wants to end Seth Rollins’ Intercontinental Title reign, they’ll clearly need to throw him off a bigger cage. Dana Brooke may have taken her first step toward individual glory by breaking away from Titus Worldwide, but her path to the top still has yet to progress. The former statistician fell to Bayley in a bout that saw The Huggable One accompanied to the ramp by five Superstars of Tomorrow: Jacob “The Open-Heart Hound,” Kourageous Karter, Michael “Super Shadow” Maldonado, Khadance “The Diva Destroyer” and Johnny “The American Beast” Hernandez.

The good news for Dana, however, is that progress was made. Dana bullied Bayley about the ring in convincing fashion, much to the consternation of Sasha Banks at ringside. But she got overzealous in her efforts, and a few canny maneuvers got The Huggable One in position for the Bayley-to-Belly that won her the match. For Dana, it’s clear the pieces are there. She just has to put them together. 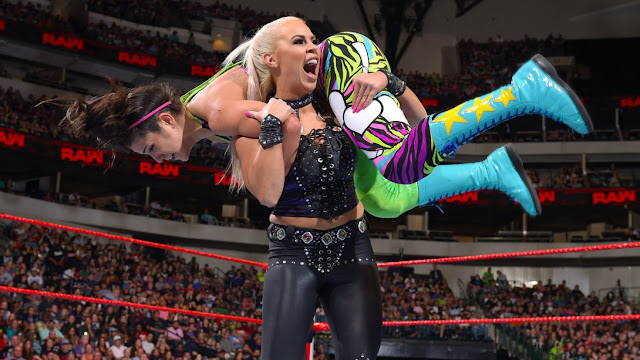 Undertaker believed Triple H’s transition from in-ring warrior to captain of industry may have blinded him to the “demise” that awaits him, The Deadman had every expectation that Shawn Michaels would be in The King of Kings’ corner to help him “outrace the reaper.” So, the legendary Superstar declared that he would bring reinforcements of his own: His brother,
Kane .

The result wouldn’t just be The Deadman taking Triple H’s career like he did HBK’s — that is all but foregone to The Last Outlaw. He would take his soul, and with Kane at his back, the Last Time Ever “will be just like the first time. I will put him six feet under. Game over.” 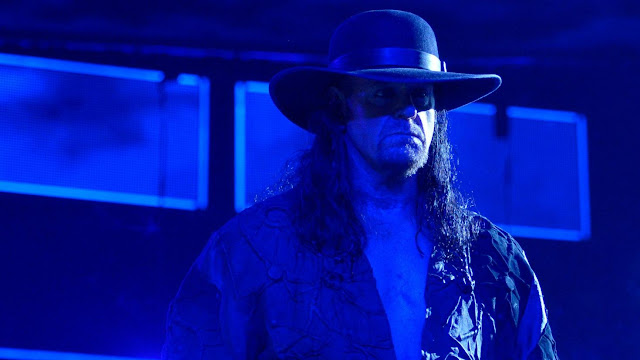 The Lunatic Fringe got his wish to throw down with McIntyre one-on-one and suffered the consequences, as the former WWE Champion was defeated by The Scottish Terminator in a match that took both Superstars to the limit one night after a marathon show-stealer for the Raw Tag Team Championship.

Between the lingering effects of the epic tag team match and their brawl atop Hell in a Cell, both Superstars were banged-up, and Ambrose took advantage with a focused attack on McIntyre’s left leg. The strategy was enough to even the playing field against the mighty Scot, and a Cloverleaf to the big man left him all but hobbled. But McIntyre broke the hold by reaching the ropes and switched his strategy, baiting Ambrose outside the ring and dodging a frantic flying axe handle off the turnbuckle.

The move carried Dean full-speed into the barricade instead, and even though a woozy Ambrose barely managed to beat the 10-count back into the ring, he sprinted headfirst into a Claymore that earned McIntyre the win. 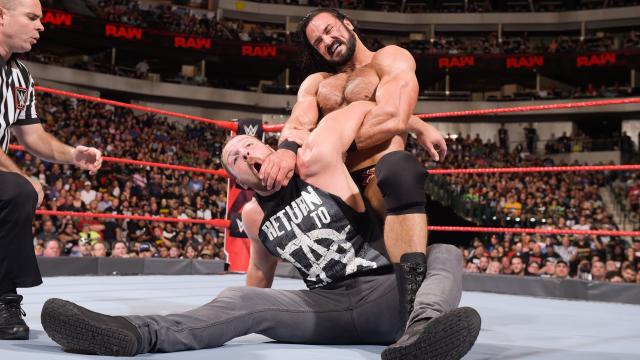 Things got complicated inside Hell in a Cell last night, as the unexpected arrival of a bearded, furious Brock Lesnar threw the Universal Title main event into such chaos that it ended in the first-ever no-contest ruling to occur inside the structure. So, understandably, everyone involved was demanding satisfaction on Raw.
Universal Champion Roman Reigns wanted a piece of Lesnar. Jilted challenger Braun Strowman demanded another opportunity at the title. And Acting General Manager Baron Corbin opted to split the difference, sanctioning a Triple Threat title match between Reigns, Strowman and Lesnar for WWE Crown Jewel , the return to Saudi Arabia that will occur on Friday, Nov. 2. 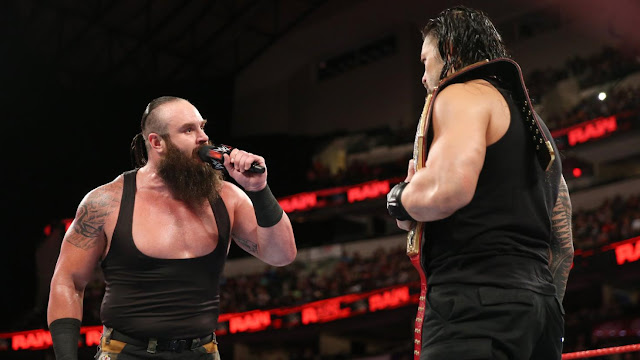 🌐 WWE Hell In A Cell, Highlights And Full Card Results