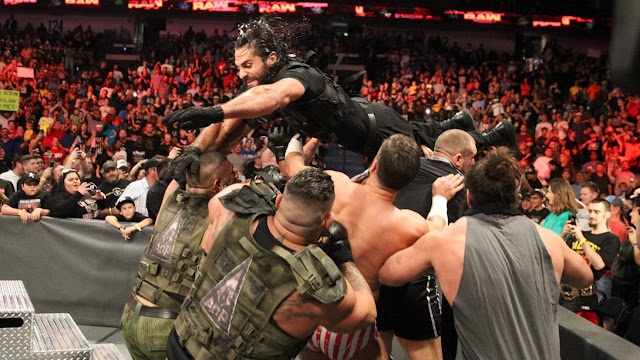 Strowman & Co. found their backup all but evaporated after The Hounds of Justice came down through the audience, axe handles in tow, and tried to fight their way to Braun and his “dogs of war.” Rather than throw down on even footing, however, Strowman, Ziggler & McIntyre opted to head for higher ground.

Once again, however, The Shield found themselves in a standoff with the law, as local police officers cornered The Hounds of Justice backstage. Rather than have them hauled off to prison a second time, however, Acting General Manager Baron Corbin offered them an ultimatum: The Shield must vacate the premises, or Roman Reigns and Seth Rollins would forfeit the Universal and Intercontinental Championships and all three would go to jail for a “long, long time.” The Shield can call this skirmish a victory, but clearly, the bigger battle isn’t quite being dictated on their terms just yet. 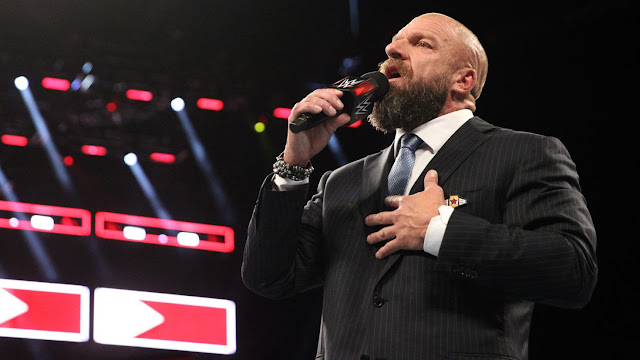 The Game decided upon further reflection that the opposite was true: Undertaker had lost respect for himself. According to the WWE COO, The Deadman knew his four WrestleMania matches with Triple H and HBK — “his last, epic moments of greatness” — had diminished him in the long run and amounted to the beginning of the end of his legend. All that was left, The King of Kings said, was a “reputation” who blamed Triple H and Michaels for his mystique’s “demise” but couldn’t bring himself to confront his foe face-to-face.

The Game did, however, agree with one thing Undertaker said. Now it’s personal. And he ended his message to The Phenom in personal fashion: “Out of the last little bit of respect I have left for you, Deadman, I will put you down.” 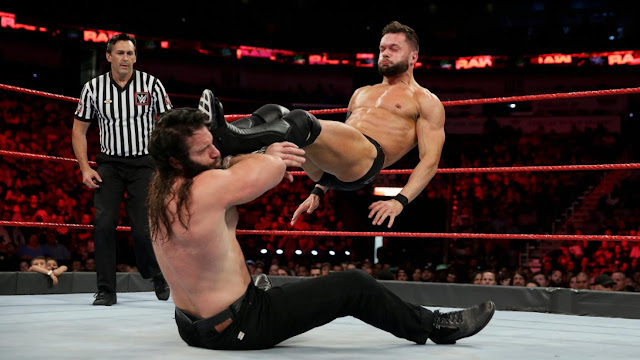 Elias was more than up to the task of hanging with The Extraordinary Man; despite the lack of preparation, there was enough history between the two Superstars to allow The Living Truth to put together a game plan on the fly. He even managed to avoid the Coup de Grâce and cue up the first-ever Universal Champion for Drift Away, but Finn used the oldest trick in the book to get the win over Elias: A small package reversal. Just because it’s simple doesn’t mean it’s not (too) sweet.

Mick Foley revealed he would be the special guest referee for Roman Reigns vs. Braun Strowman at WWE Hell in a Cell 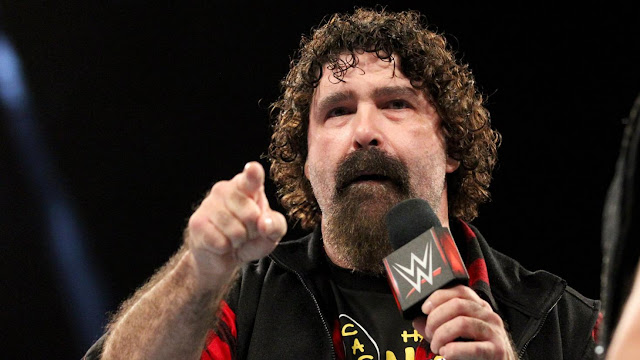 Foley revealed in a 20th-anniversary commemoration of his infamous Hell in a Cell bout with The Undertaker, The Hardcore Legend, looking to feel the magic once again, will be the Special Guest Referee for the Universal Title Match between Roman Reigns and Braun Strowman inside Hell in a Cell this Sunday.

The issue, however, was that he announced this right as Elias had been preparing to serenade New Orleans with his musical genius, and The Living Truth wasn’t about to let Foley’s emotional speech pass without incident. In fact, Elias was so vocally unimpressed with Foley’s decision, his history, and Foley himself, that he told the WWE Hall of Famer to “shut his mouth.” But Foley had the last word: As a former General Manager, he had received special permission to make a match for the night. The match he’d chosen? Elias vs. Finn Bálor. 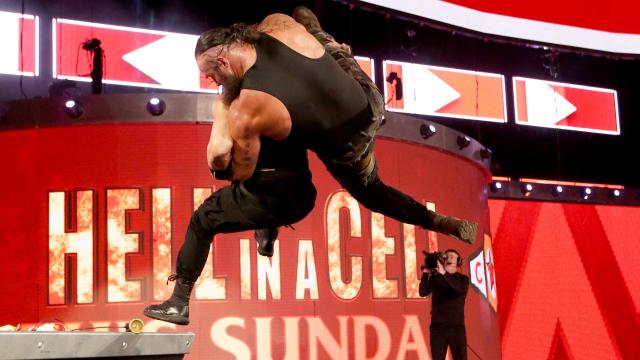 Reigns initially refusing to answer Strowman’s call-out, The Monster Among Men reiterated his promise to take Reigns’ title at WWE Hell in a Cell and even threw a warning in the direction of guest referee Mick Foley. That’s when The Big Dog made his presence known, appearing atop the commentary table with his title in hand. Strowman pursued Reigns up the ramp and got the better of him in the initial throwdown by driving him into the stage’s LED board before laying him out atop the commentary desk.

His attempts to finish The Big Dog off, however, were literally upended. From atop the announce desk, Strowman hoisted Reigns onto his shoulders and dropped him through the stage with a titanic Samoan Drop that The Gift of Destruction was unable to rise from. Give Reigns credit for doing the near impossible and managing to keep Strowman down. To keep his title, however, he’ll have to do it again. 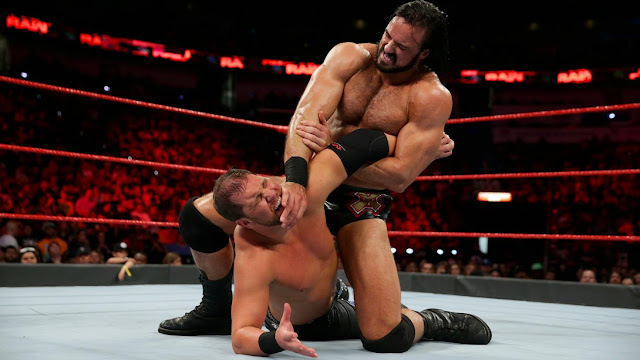 Even though the champs held off an effort by The B-Team that was so gritty and inspired that they had to resort to chicanery — McIntyre dispatched Curtis Axel with a Glasgow Kiss, and Ziggler raked Bo Dallas ’ eyes — to set up the Claymore-Zig Zag combo, they didn’t get to enjoy the fruits of their labor: Dean Ambrose &
Seth Rollins jumped the titleholders from behind immediately after the match and sent them scurrying.

Acting General Manager Baron Corbin was furious that his edict had been defied and The Shield had returned, but Rollins & Ambrose pointed out that they were acting on their own, and The Shield had technically kept to their word and stayed away. They also seemed to get Corbin to kind of-sort of admit he had them arrested last week, bringing out a Deputy Sheriff (“G. Ambrose,” according to his uniform) to take The Lone Wolf into custody. However, after a quick sidebar, Rollins & Ambrose opted not to press charges and Corbin later ruled that Ziggler & McIntyre would defend their titles against Ambrose & Rollins at the WWE Hell in a Cell pay-per-view. His reason? That Raw Commissioner Stephanie McMahon wanted Sunday’s event to have as many big matches as possible. 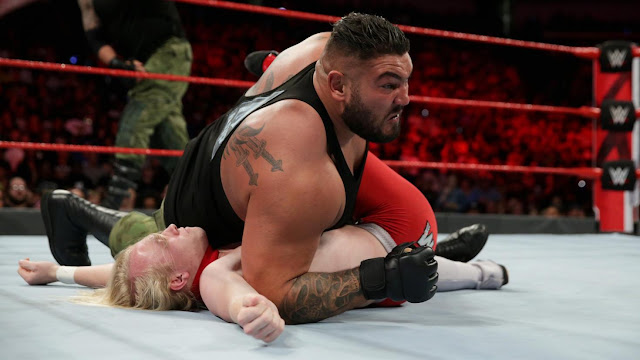 Drake Maverick once again shepherding Akam &
Rezar through a one-sided demolition of local talent. There’s certainly something to be said for seizing opportunities where they come, but the intrepid duo of Ronnie Ace & Nathan Bradley might have been better off leaving this one alone: Rezar brutalized Ace to such a degree that Bradley tried to take a walk, only to wander into a clothesline from Akam on the outside. After that, it was a short walk to the Super Collider and another victory in AOP’s book. 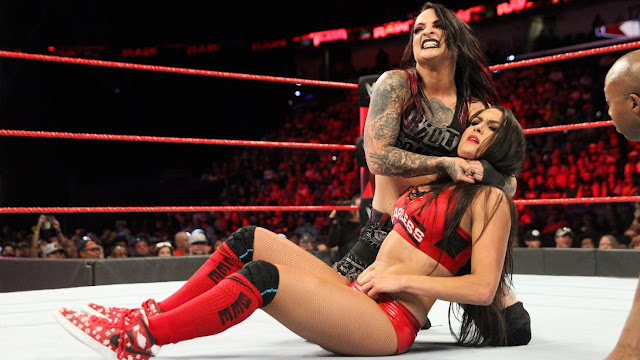 Nikki used her powerhouse style to get past Ruby’s wild brawling would be impressive enough, but given that The Riott Squad was lurking at ringside, the former Divas Champion kept having to turn her attention to her would-be interlopers. A haymaker made quick work of Logan on the apron, but Morgan took a little help to get rid of: After Nikki thwarted the Riott Kick and got Ruby in position for the Rack Attack 2.0, Liv rushed the ring, but Brie Bella pulled her out of the squared circle and clocked her with a right hand to clear the way for Nikki’s fornidable signature move. 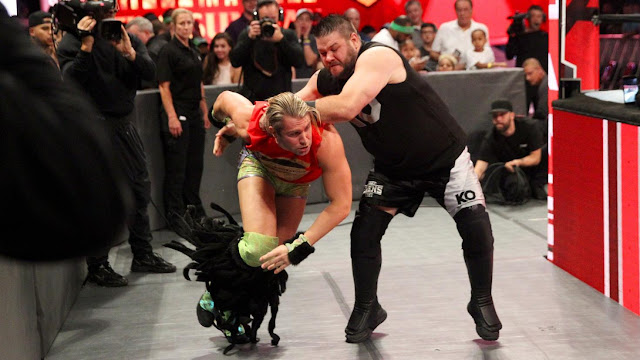 Acting General Manager Baron Corbin made him an offer he couldn’t refuse: That Owens could do whatever he wanted to anyone he wanted without fear of reprisal. In other words, the devastation KO inflicted upon Tyler Breeze in lieu of their planned match was essentially business as usual — as was his role in the attack of The Shield and especially his bushwhacking of Bobby Lashley last week, the last of which Owens elaborated on after dismantling Prince Pretty.

KO had decided that Lashley had some business to answer for, as the former ECW Champion is the one who injured Sami Zayn and kept him from his rightful place at KO’s side the last couple of months. That, Owens claimed, is Bobby Lashley’s fault. And with carte blanche at his back, KO is out to re-institute The Kevin Owens Show with “anarchy, agony and destruction” for whoever he deems deserving. 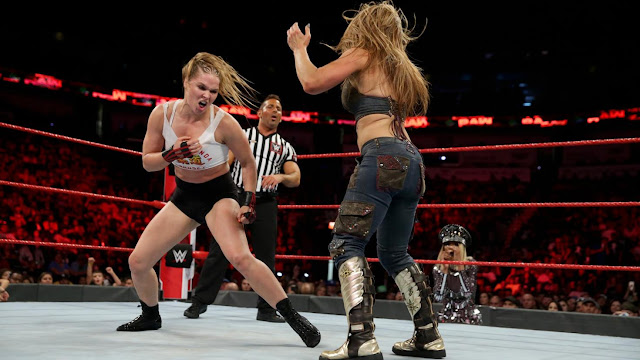 Alexa Bliss and her team strategy, unsurprisingly, revolved around keeping Rousey out of the ring at all costs. Team Ronda’s strategy, unsurprisingly, revolved around getting Rousey into the ring with the woman she savaged at SummerSlam. Thanks to some tag team chemistry (they broke out the Hart Attack in tribute to Natalya’s late father, Jim “The Anvil” Neidhart) and some grit from Natalya, they got Alexa where they wanted her, but The Goddess proved a greater threat to Rousey than anticipated.

Playing off Ronda’s single-minded aggression, Alexa lured the champion outside the ring and went to work on her already-tenderized ribs, throwing Rousey torso-first into the barricade and apron. Rousey fought through the pain to submit Mickie with the Armbar, but she tellingly had to fight through a lot of pain to do it. And given that Alexa landed one more cheap shot that brought the champion to her knees, it’s clear she’s banking on a less-than-100 percent Rousey this Sunday. She just might get it.