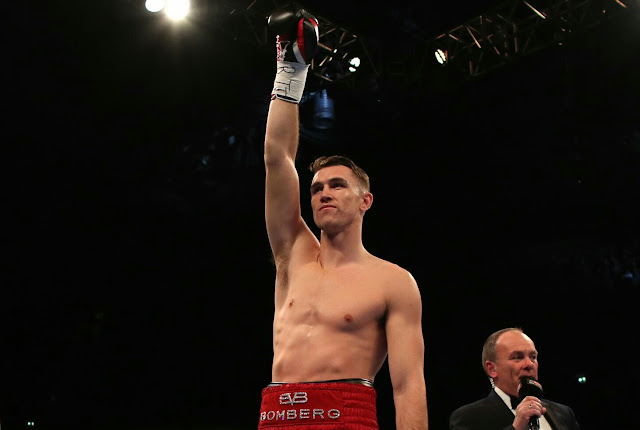 R1 : Callum Smith came out strong in the first, making his intent known in a close round, both seeking to secure rhythm and finding it difficult to commit.
Smith found a long right and again lands with the right but this time Groves responds, at the end Smith Finished strong (10 – 9)

R2 : Smith took the round, hiding behind his Jab, shoots out his jab to the head and body but catches a right as he gets on the inside. He judging the distance well and beautifully counters with a right.

R3: Great shot from Smith wobbles Groves in that round before the Champion comes back and fights fire with fire and heads into a tear up with Smith! Best round so far (28-29)

R4 : Close round, with Smith coming forward and landing the jab. Groves countering well in stages, but the pressure coming from Smith who looks very measured. 3-1 Smith.

R5: Groves goes to the body an awful lot in that round as well as landing a terrific right hook to the head of Smith! Smith down in the round but the referee said he slips! Groves the busier of the fighters and takes the round (47-48)

R6 : Two loaded-up right hands are swapped early, Smith’s looked the meatier though and ‘Mundo’ follows it up with another. Smith stays in the pocket and eats a left counter but does land with that dangerous right lever again. Groves is having to work a lot with his feet in and out and sends two jabs

R7 : DOWN! A huge left hook suddenly crashes Groves on the temple and the champion is rocked, sent stumbling back. Smith tastes blood and savagely unloads in the corner, both the left and right hammering home. Groves sags down to his knees with no reply.