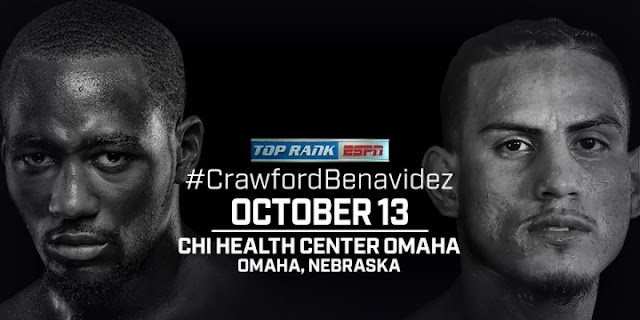 Terence “Bud” Crawford (33-0, 24 KOs) will be defending his WBO welterweight strap against Jose Benavidez Jr. on Saturday, Oct. 13 at the CHI Health Center Omaha,  exclusively on ESPN and ESPN Deportes at 10:30 p.m. ET with undercards streaming live in the United States at 7 p.m. ET on ESPN+.

Crawford will be making the defense ofvthe strap he won with a 9th round TKO of Former WBO welterweight champion Jeff Horn after a 10 month layoff , dominating Horn from start to finish to become a three-division champion.

Jose Benavidez (27-0, 18 KOs), a former WBA interim super lightweight champion riding into this title fight with a first round KO win over previously undefeated Frank Rojas at 1:23 of the opening round.

“The Crawford-Benavidez fight is an old-time grudge match. These are two elite fighters who don’t care for each other, to put it mildly,” said Bob Arum, Top Rank’s founder and CEO. “They will battle each other at a fever pitch. I can’t wait to watch the action.”

“This fight is the fight he has been calling for, and now he will get the chance to see what it’s like to be in the ring with a real champion,” Crawford said. I’ll happily give him his first L.”

“I’ve been wanting this fight for three years. I know I have what it takes to beat him, and I am going to beat him,” Benavidez said. “Crawford has been running his mouth and saying I’m a nobody. I’m going to take full advantage of this opportunity.”