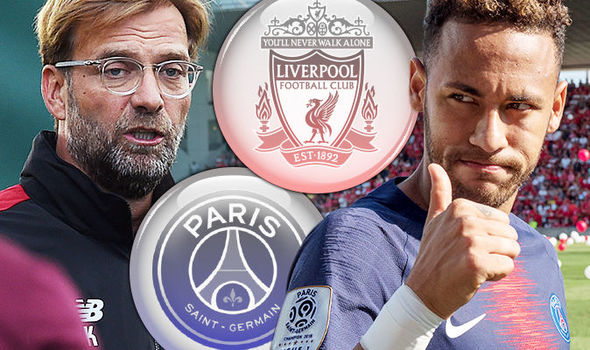 Liverpool FC led by Jurgen Klopp will want to transfer their 100% Premier League form to the UEFA Champions League face a stern test in the opener against Paris Saint Germain ( PSG)  in the opener on Tuesday.

PSG also have a 100% French league 2018/19 season record and had rested their star player Neymar Jr for the clash cat Amfield, which according to Kloop will give the Reds a “full Neymar football package”.

Klopp has acknowledged Neymar Jr is still one of the best Footballers of our time but how do they stop the best, as their plot their own Champions League Legacy.

“Neymar was rested at the weekend so he will be 100 per cent fresh for us, not injured any more like he was at the World Cup, so we will see the full Neymar football package,” said Klopp.

“We will have to cope with that and that is what we will try to do. But we [also] want to play football and we want to win the ball.

“We don’t try to ‘act’ in these kind of things, we try to avoid passes to him and try to avoid him winning challenges which is a big job.

“But I’m not sure if it is 100 per cent possible to avoid his qualities – I’m pretty sure it is not [because] he is a fantastic footballer and an outstanding player.”

Liverpool captain Jordan Henderson believes that PSG is made up of more than the 26 year old Brazilian, with Kylian Mbappe, Angel di Maria and Edinson Cavani all in there to create them big problems.

“It’s not just him we have to stop, we have to stop the whole team and it’ll be difficult – he is just one of many top players in their team,” said Henderson.

“But we’re a good team as well and we can cause them problems. We’ve proved against big teams before we can perform and get the result we need.”