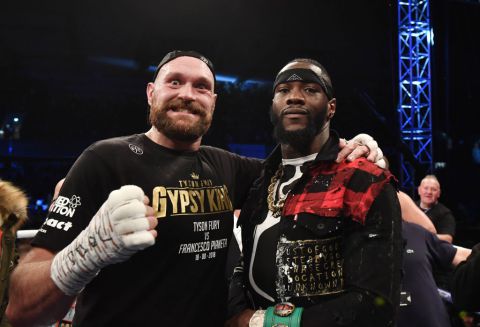 Tyson Fury’s promoter Frank Warren has given positive information on the progress of the Wilder-Fury fight, which he say’s will host it’s first press conference on Monday next week, which will also kickstart the promotional tour of the anticipated heavyweight showdown.

The media events surrounding the fight is expected to bring fireworks, as both personalities have been known to bring in the past. A venue in the US for the event slated for Dec 1st or 8th will also be revealed in the coming Press Conference.

“It’s been about deciding what venue it will go to. It’s not an issue because it’s a nice problem, it’s who is going to put up the most money.Warren told IFL TV

“We’ve got a press conference next Monday, Wilder will be in town, and that will be the start of the (promotional) tour.
“We do London, then we go to New York, then on to Los Angeles.

“You get the usual things with judges, depending on where it is going to take place. If you go to Las Vegas they want to appoint all the officials; we don’t particularly want that.

“We want the officials agreed between the two parties, and they should be as neutral as possible. That is one of the things we have been working on.”

Frank Warren Will most likely reveal in details, other information concerning the fight between Deontay Wilder and Tyson Fury when finalizing the promotional duties of Anthony Joshua Vs Alexander Povetkin this week.